The world’s population grew by 174% between 1950 and 2010—a nearly tripling of the number of people on the planet. This increase has only heightened the demand for food, feed, and fiber to accommodate this burgeoning population.

While much of the required yield is being produced on smaller-than-expected cultivated land areas through the development of agricultural technologies, there is still a need for additional agricultural land. This increased demand has been met through significant conversion of non-agricultural lands into croplands, particularly natural grasslands.

Originally comprising more than 25% of the earth’s land surface, global grasslands are much less widespread today. More than 50% of temperate and 16% of tropical grasslands have been lost through conversion to agricultural or industrial uses. These conversions can have severe consequences in terms of habitat loss for native species and decreased flood mitigation. They can also contribute to a rise in carbon emissions. Grasslands act as natural carbon sinks- meaning they capture atmospheric carbon and store a fraction of it as soil organic matter. The conversion of  grasslands to croplands converts the ecosystem into a net carbon emitter, especially when management practices are insufficient to retain the sequestered carbon in soil (e.g., excessive soil tillage, inadequate nutrient management, etc.).

A research team from the University of Maryland’s Department of Geography comprising Dr. José P. Castaño-Sánchez, Dr. Stephen D. Prince, and NASA Harvest’s Dr. César Izaurralde recently explored how carbon emissions are impacted by the conversion of grassland to croplands. Looking at a study site stretching across a large portion of southern Uruguay, the team modeled the extent to which carbon emissions might increase under different grassland conversion scenarios.

Uruguay, along with Argentina and Brazil, is home to the Pampa grasslands, one of the largest temperate grasslands in the world. Much of this grassland in Uruguay remains unconverted and makes for a great site to study how its potential conversion might impact carbon emissions. Further, Uruguay has seen its cropland area expand from 200,000 hectares to more than 1,000,000 ha between 1999 and 2010. This rapid expansion and the large amount of untapped grassland make it vital to understand how any possible tampering will impact carbon sequestration. 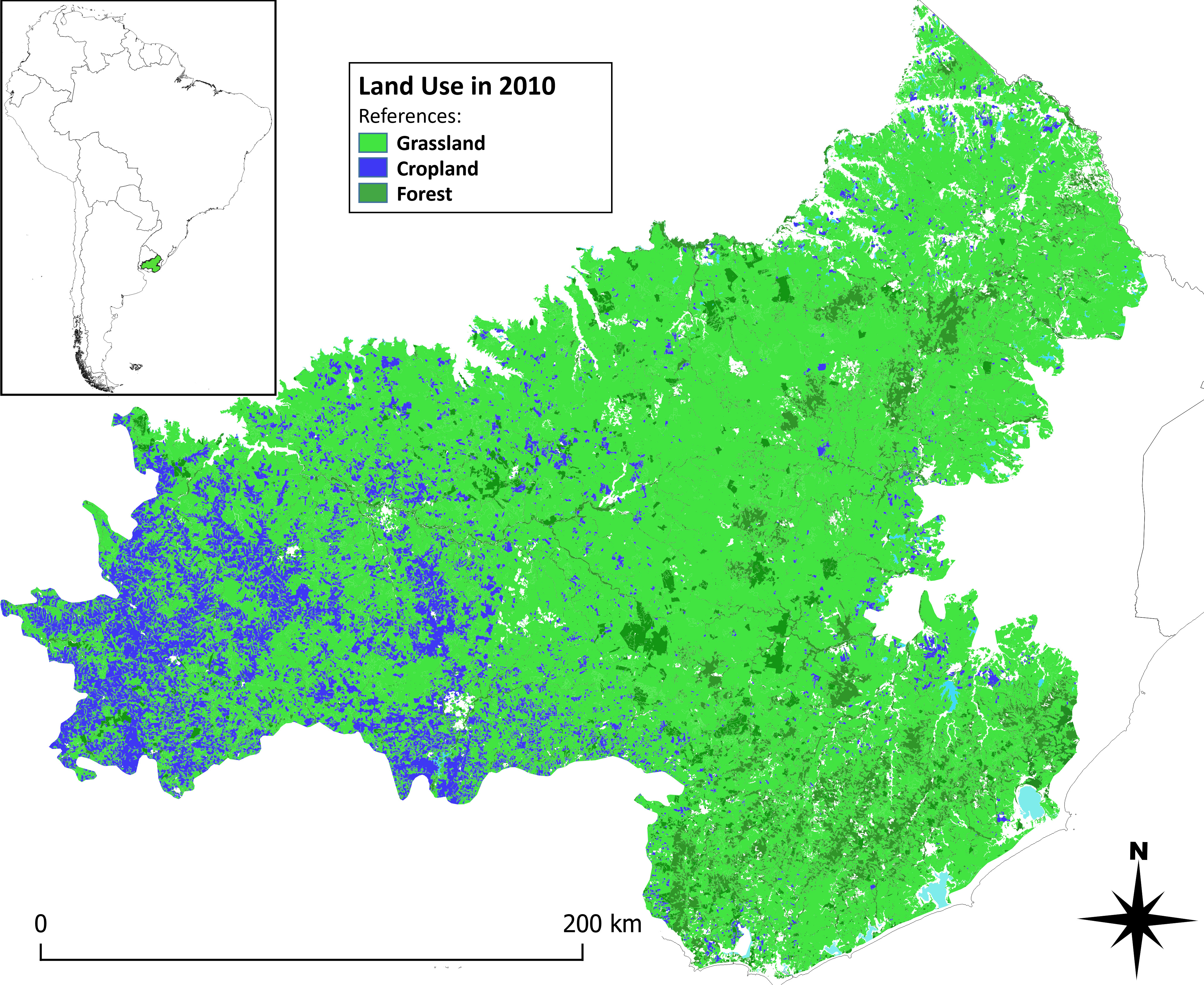 Map of the study site showing main LCLU classes in 2010

To predict potential increases in carbon emissions across Uruguay, the team used the Environmental Policy Integrated Climate (EPIC) model. EPIC has been used since the 1980’s, with multiple updates over the intervening decades, to simulate crop growth under a variety of management decisions like tillage, irrigation, and crop cycling. It is then used to estimate the resulting environmental impacts e.g. erosion, water quality, nutrient cycling, and atmospheric carbon concentration.

After calibrating the model with field-scale data collected within the study site and developing a geospatial tool integrating the model EPIC with local climate, land, and management data, the team modeled at a regional scale how carbon emissions differed between the current amount of grassland and a fully converted cropland scenario. They estimated the net ecosystem exchange (NEE), a measure of the net carbon flux between land (soil and plants) and the atmosphere. A positive value of NEE indicates a net loss of carbon to the atmosphere. Conversely, a negative NEE indicates a net flux of carbon retained by plants and soil.

Maps showing results of EPIC simulations between 1996-2015 of average yearly carbon fluxes of NEE for grassland, cropland, and grassland minus cropland scenarios.

Results showed  grasslands had a NEE score of 0.10 while their cropland conversion scenario had a NEE score of 0.70. These scores indicate that both scenarios introduce carbon into the atmosphere. However, the current grassland environment is almost carbon neutral, while converted croplands lose 7x more carbon than grasslands, a significant increase indeed.

These results show significant potential increases in carbon emissions if land conversion is done to its full potential. However, the introduction of best management techniques can allow for necessary agricultural productivity while minimizing carbon sources. For instance, the authors note that crop rotation like the inclusion of winter cover crops could improve soil uptake of main crop biomass.