The GEOGLAM Crop Monitor for AMIS has released its 100th report this month. Created in 2013 to aid the G20’s Agricultural Monitoring Information System (AMIS), the Crop Monitor for AMIS has provided monthly reports to improve transparency in global agricultural commodity markets. The reports evaluate growing conditions of four major commodity crops (wheat, maize, rice, and soybeans) within the members of the G20, as well as 7 additional countries that represent important producers and exporters. Together these countries produce between 80-95% of global production, making the monthly Crop Monitor reports a critical resource in estimating global supply months ahead of harvest.

Following food price crises in 2007-2008 and 2010-2011, the Group of 20 (G20), an organization of the 19th largest national economies, plus the European Union, came together with the goal of preventing future supply shocks and resulting price crises. At a meeting of agricultural ministers from each member country in 2011, the G20 released its Action Plan on Food Price Volatility and Agriculture, creating two new organizations to prevent future blindsides.

Countries Team Up to Improve Response

The first organization, Agricultural Market Information System (AMIS), was designed to bring together major food-producing and exporting countries (initially the G20 countries, but has since expanded to include 7 additional countries) to share data, improve information platforms, and coordinate action during market uncertainty.

The second organization would be focused on improving agricultural monitoring efforts using Earth observation satellites. Based within the pre-existing Group of Earth Observations (GEO), the newly created organization, Global Agricultural Monitoring Initiative (GEOGLAM), would be a voluntary international effort where member countries would work together to “build on existing agricultural monitoring programs and initiatives at national, regional and global levels and to enhance and strengthen them through international networking, operationally focused research, and data/method sharing”.

Creation of the Crop Monitor

Soon after its formation, AMIS reached out to GEOGLAM with a request to produce a regular remote sensing-derived analysis of agricultural conditions for each AMIS country. GEOGLAM responded to this request with the creation of its monthly Crop Monitor for AMIS reports. These reports reflect an international, multi-source, consensus assessment of crop growing conditions, status, and agro-climatic factors likely to impact global production. The Crop Monitor for AMIS brings together over 40 partners from national, regional (i.e. sub-continental), and global monitoring systems, space agencies, agriculture organizations, and universities. Each partner organization evaluates various environmental variables detected by Earth observation satellites including soil moisture, temperature, and vegetation condition, alongside analysis of local drivers to produce production outlooks for four major commodity crops (wheat, maize, rice, and soybeans) for each AMIS country.

Today, 100 issues in, the Crop Monitor has proven itself to be an enduring and incredibly useful tool to improve market transparency and a valuable contribution to the AMIS mission. In remarks celebrating the 100th report, former Secretary to AMIS, Abdolreza Abbassian said “The Crop Monitor was conceived as a new tool to assist in food market assessment and early warning. Marking its 100th edition during these troubled times, the Crop Monitor can clearly demonstrate its effectiveness and relevance as an indispensable source for timely and evidence-based information.”

Since its inception in 2013, the Crop Monitor for AMIS has improved how commodity markets and policy makers understand global crop conditions. As many top producing countries have faced adverse growing conditions including drought, flooding, and natural disasters over the past several years, the Crop Monitor for AMIS has provided a platform to publicize how these events impact local crop conditions and might influence global markets.

In the context of the current Russian invasion of Ukraine (two major wheat producing and exporting countries) for example, the Crop Monitor framework has allowed the world to analyze crop conditions in other countries in an effort to prepare for potential production shortfalls stemming from the war. 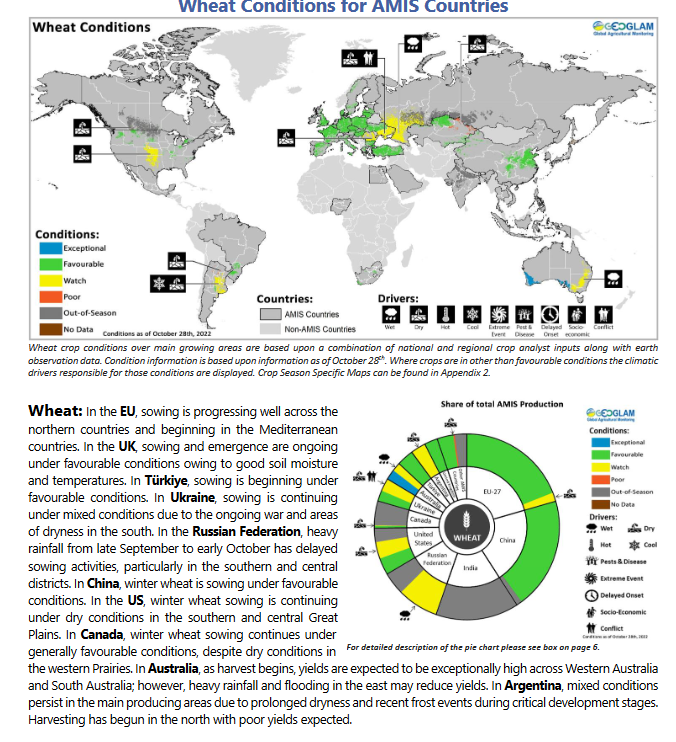 One particularly notable piece of the Crop Monitor for AMIS reports are the global and regional maps and charts that the team produces to visually communicate crop conditions. Though not initially included in the reports, these graphics have become indispensable says Brian Barker, Lead of Crop Monitor for AMIS.

“Early Crop Monitor reports provided short summaries of the four main crops alongside normalized difference vegetation index (NDVI) maps with crop calendar overlays. While NDVI maps may be interpretable by remote sensing scientists and agronomists, it did little for the target audience of economists and policymakers. The Crop Monitor for AMIS has evolved to provide additional text along with quick-to-understand crop condition maps and in-house developed crop condition pie charts, that indicate where and what percent of each crop is being affected by adverse climatic conditions. These charts have become so popular that other crop monitoring organizations are reproducing them in their areas of interest.”

Denis Drechsler, AMIS Project Manager at the Food and Agriculture Organization, agrees saying, “The Crop Monitor graphics are intended to help present a complex set of information and convey simple messages that can be easily understood by the readers, i.e. are crop growing conditions overall favorable, potentially worrisome or alarming. In this respect, I believe the combination of a world overview map to highlight hotspots at global level as well as crop-specific pie charts with country-level information have done a marvelous job in getting across this message.”

Expanding the Scope of the Crop Monitor Reports

The Crop Monitor for Early Warning has proven itself to be a useful tool in improving understanding of food production shortfalls and potential food insecurity in already tenuous countries. With the Horn of Africa facing crop failures after its fourth consecutive poor rainy season, the Crop Monitor for Early Warning reports allow humanitarian aid groups and policymakers to more easily observe ground conditions and quickly respond as needed.

“At times of uncertainty,  such as those that we are experiencing today, remote sensing information systems are critical for enhancing market transparency, providing early warning of unexpected shortfalls, and assessing production in regions where ground access is not possible,” said Dr. Inbal Becker-Reshef, Program Director of the NASA Harvest program and member of the GEOGLAM Secretariat.

“This is what the crop monitor provides. It is a great example of the value of the international community coming together to provide science- driven, actionable information, and timely information on global crop supplies. Working closely together with the AMIS, and now the Early Warning, communities, we were able to develop remotely sensed driven information products that are widely used across the agricultural sector to inform food security and policy decisions. Reaching the 100th issue of the Crop Monitor for AMIS is a remarkable achievement and a testament to the value of this international effort.”

The Crop Monitor team has also recently expanded its reporting to publish a monthly near-global crop outlook that synthesizes the data from the Early Warning and AMIS Crop Monitors into one product. Featuring 130 countries, the Global Crop Monitor looks at the four major commodity crops (maize, wheat, rice, and soybeans), but expands its scope to outside the traditional AMIS countries.

And as with the AMIS and Early Warning reports, the graphics within the global report allow for quick visual assessment of these four crops. To help facilitate this analysis, the Crop Monitor team developed a new crop condition indicator that shows how each of the four reported crops is faring compared to the previous month and year.

To improve its analysis capabilities, Crop Monitor for AMIS and Crop Monitor for Early Warning partnered with the Climate Hazards Center (CHC) at the University of California Santa Barbara in 2018. The CHC specializes in global and regional climate forecasting, particularly in the areas of precipitation and drought. The CHC’s regional climate outlooks contextualize abnormal rainfall and temperature conditions (both observed and forecasted) that may impact food production or pose other risks to society, with a particular focus on food-insecure regions.

Inside the 100th Issue

The 100th Crop Monitor for AMIS is reporting generally favorable conditions for soybeans across AMIS countries with mixed conditions for wheat, maize, and rice.

Maize is beginning to be sown in South Africa, continuing in Argentina and Brazil, while maize crops in the US and Europe show poor yields as they’re harvested. Winter wheat in the northern hemisphere is off to a positive start, whereas wheat crops in Argentina and Australia are being watched due to dryness in the former and persistent rains in the latter. Rice production is largely good, though there is some concern in parts of China. An overview of the report is available on the Crop Monitor website. Further details of AMIS-country agricultural production can be read in the full report.