NASA Harvest, in partnership with the USDA’s Agricultural Research Service, is pleased to announce GEO-CropSim, a modeling framework for assessing water use and simulating crop yields at the regional level. A hybrid method that integrates Earth observations into process based crop models, GEO-CropSim uses satellite imagery, climate data, and farm management information to accurately estimate crop yields and water consumption at a high spatial resolution. With the rise in the number of food insecure populations around the world and increasing pressure on limited water resources, GEO-CropSim is a useful decision-making tool to help monitor and improve crop production while simultaneously analyzing water consumption.

Global food insecurity is increasing - a report from the United Nations’ Food and Agriculture Organization found that nearly 1 out of every 3 people in the world lacked access to adequate food in 2020, an increase of 320 million people from the previous year. The same report found that the number of people facing hunger is also on the rise and is projected to reach 660 million people by 2030 - double the population of the United States - within the next 8 years. Further, global water resources are decreasing as the globe deals with frequent droughts. This lack of water can severely affect crop production and several countries including the United States, Russia, Ukraine, and Brazil have seen drought conditions negatively impact their growing seasons and agricultural exports. This can quickly have ripple effects as global agricultural commodity markets are tightened and import-dependent nations face higher prices and smaller supply.

Because of these pressing issues, it is vital to identify areas with struggling production while improving management techniques to increase crop yields and better utilize resources like water. Designed by a group of researchers at the University of Maryland’s Department of Geography and the USDA’s Agricultural Research Center, GEO-CropSim was designed to help answer these problems. The model uses a combination of biophysical and meteorological input data to estimate crop yields. This gives advanced warning of low potential yields and allows farmers and policymakers to evaluate the effectiveness of different management strategies. Estimating yield also assists in crop insurance, land rental agreements, market stabilization, and informing agricultural policies. GEO-CropSim also allows researchers to study the evapotranspiration (ET) rate of croplands. ET is the rate of transfer of water vapor between the ground and the atmosphere and includes evaporation of water from the soil and through plant transpiration. It provides a useful measure of the total consumption of water within cropland - thus allowing for analysis of the efficiency of water use.

Given the importance of yield estimation, a number of models have been developed for this purpose. Succinctly put, there are three common methods of yield estimation. The first are process based models which combine climate and soil data with management decisions, such as irrigation and fertilizer application, to simulate crop growth in a series of timesteps. Process based models can be very accurate when input data is available, but suffer from an unfortunately common lack of data at the necessary scales.

Another common method uses remotely sensed data to monitor crops from orbit. This data is then used to estimate different crop characteristics like leaf area index, land surface temperature, or water content within leaves. These characteristics are then extrapolated to predict overall crop condition and future yield. Remote sensing based models limit labor costs, have lots of available data and can be very useful when correctly calibrated. However, as these models are trained within specific climate, crop, and environmental conditions, they tend to suffer transferability issues in areas that are different from their training location. GEO-CropSim is the third type of crop yield model: a hybrid that uses climate, soil, and management decisions while filling in data gaps with satellite imagery that has high spatial and temporal resolution.

GEO-CropSim is based on a widely used process based model that has seen a lot of success in crop yield estimation over the years. The model, Environmental Policy Integrated Climate (EPIC) crop simulation uses farmer decision data like irrigation and fertilizer application along with soils and climate data. Two important climate data inputs for EPIC are leaf area index (LAI) and crop emergence dates. LAI is a measure of the size, or area, of the leaves of a plant - in this case crops like maize or soybeans. LAI is an important indicator of the condition and future potential yield of a crop. Crop emergence dates refers to the timeline of when planted crops first sprout and the rate at which they grow. This is also useful for understanding the health of crops and their likely size at harvest. 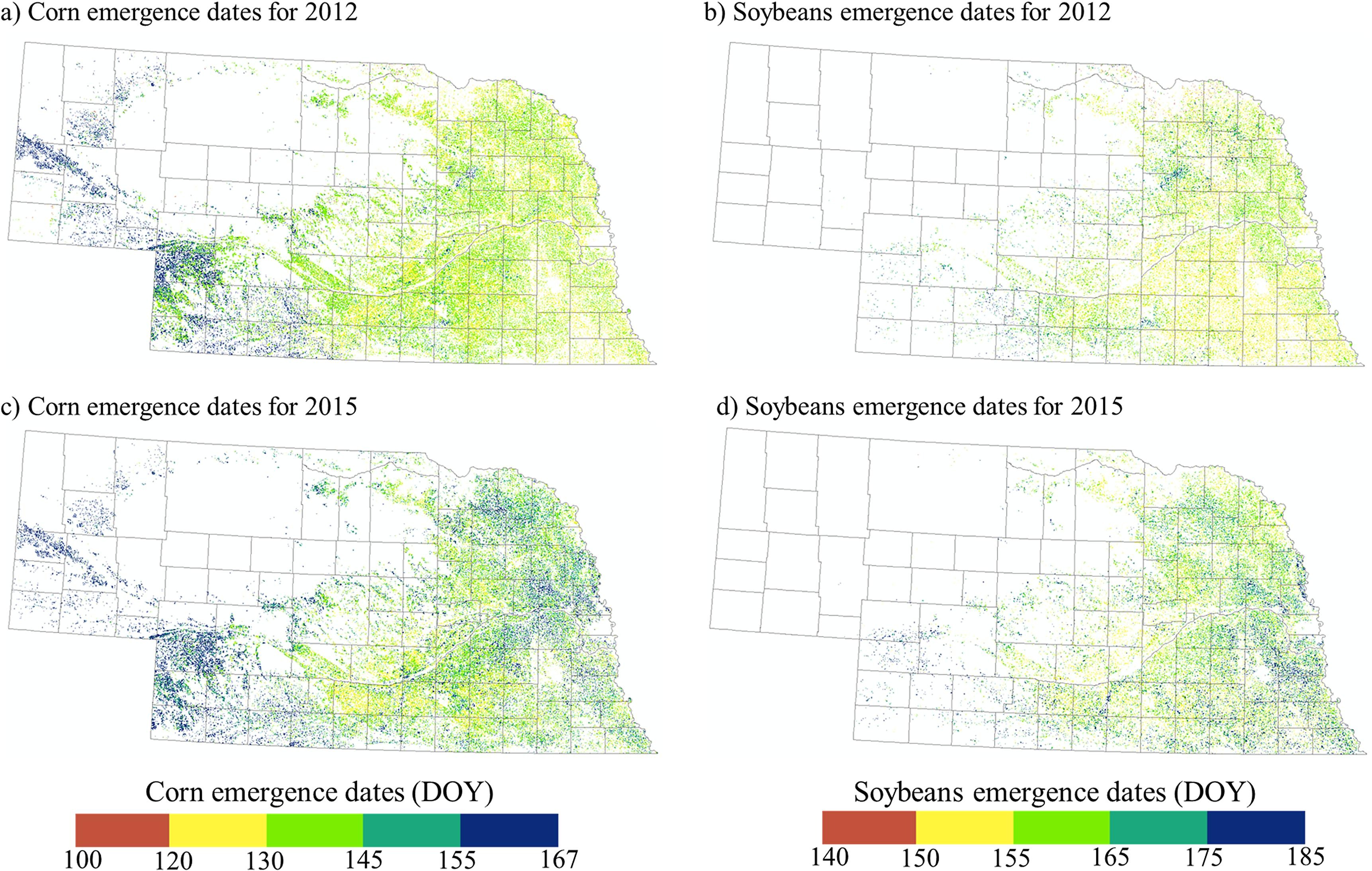 Figure 1. Estimated emergence dates for corn and soybeans for 2012 and for 2015 at 30 m spatial resolution.

These measurements can be hard to acquire however, particularly at the necessary size and scale. GEO-CropSim expands on the EPIC model by changing how these variables are collected. Instead of coming from coarse resolution, interpolated datasets, GEO-CropSim introduces LAI and crop emergence dates determined using remote sensing data. LAI is a common remote sensing product that can be easily calculated with spectral imagery taken from orbiting satellites. The team from UMD and USDA calculated crop emergence days using high temporal spectral imagery and an algorithm called Phenocrop that creates a phenological timeline of cropland. In other words, they go through a dense timestack of spectral imagery and record the “greenness” of a field as the planted crops sprout and grow. By replacing these two inputs with remotely sensed data, the GEO-CropSim team ensured that the model was provided with sufficient and accurate data for its analysis.

GEO-CropSim was tested at three locations in the US state of Nebraska for both maize and soybean fields. Further, the team wanted to evaluate how the model would work in different growing conditions, so they used data from one drought year (2012) and a non-drought year (2015). After modeling predicted yields for the state in both years, the estimates were compared to historical yield data and ET observations from the USDA’s National Agricultural Statistics Service (NASS).

GEO-CropSim was found to produce a higher “granularity” or more specific results across the study sites than the original EPIC model. This is due to the coarse spatial resolution of the input data used as inputs for the EPIC model. As the GEO-CropSim model uses much finer spatial resolution LAI and crop emergence dates data, it was able to provide a higher level of detail across the studied fields. The authors note that the USDA-NASS data showed 62% and 11% declines in production for non-irrigated and irrigated cropland respectively in 2012 (drought year) compared to the non-drought 2015. Both GEO-CropSim and EPIC showed this general trend, however the former showed it in much closer alignment with the USDA-NASS numbers. GEO-CropSim estimated the declines at 69% and 20% for non-irrigated and irrigated fields respectively for the same two years, while EPIC estimated declines of 84% and 50%. 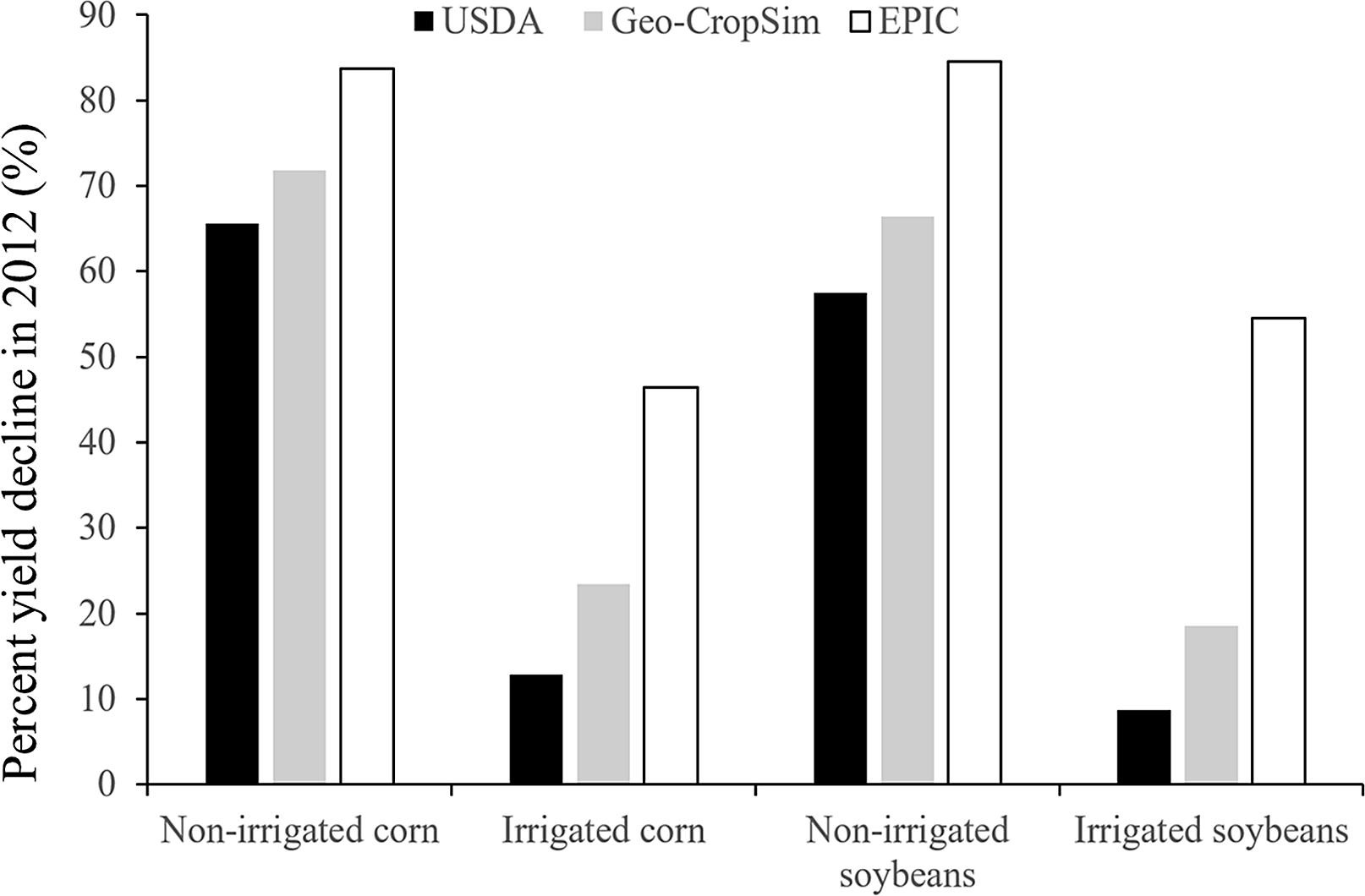 Figure 2. The percent of yield decline (averaged across state) in 2012 compared to 2015 for both irrigated and non-irrigated maize and soybean crops.

Further, GEO-CropSim was able to show ET rates in the study sites across Nebraska. In the drought year, the model showed ET rates much lower in non-irrigated fields than in coincident fields in 2015 matching the reality of drought plus no irrigation equaling low levels of ET. The authors also note that previous studies found that farmers in the eastern part of Nebraska increased irrigation during 2012 to combat the drought at much higher rates than those in the western part of the state. The figures below showing GEO-CropSim estimated ET rates across Nebraska in 2012 and 2015 support these previous findings as they show higher ET rates (meaning more water introduced into the ground and then transferred into the environment) in the eastern part of the state compared to the western part.

GEO-CropSim represents the combining of process and remote sensing based crop yield models and brings benefits of both to researchers, farmers, and policymakers. With ever growing food insecurity, the need for more reliable crop yield models is only increasing. Additionally, as access to water becomes more scarce and variable due to climate change, efficient use of water in agriculture is necessary to ensure future access to this vital resource remains available. GEO-CropSim is an effective tool for both of these purposes and can find much use for those invested in a food secure future. The original study from the team at UMD and USDA can be read here. 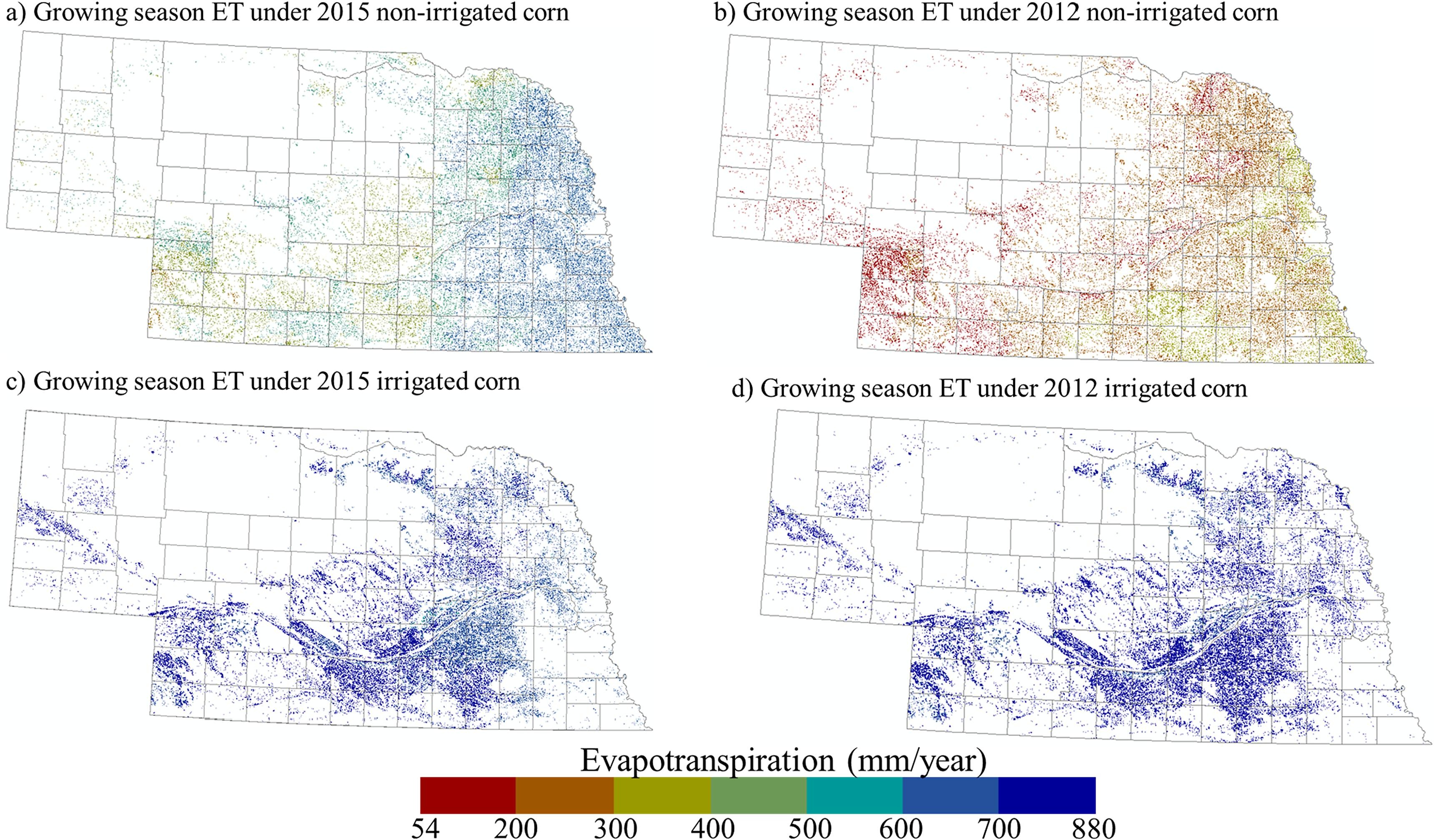 Figure 3. Evapotranspiration estimates from the GEO-CropSim model for maize crops in 2012 (drought year) and 2015 (non-drought year). 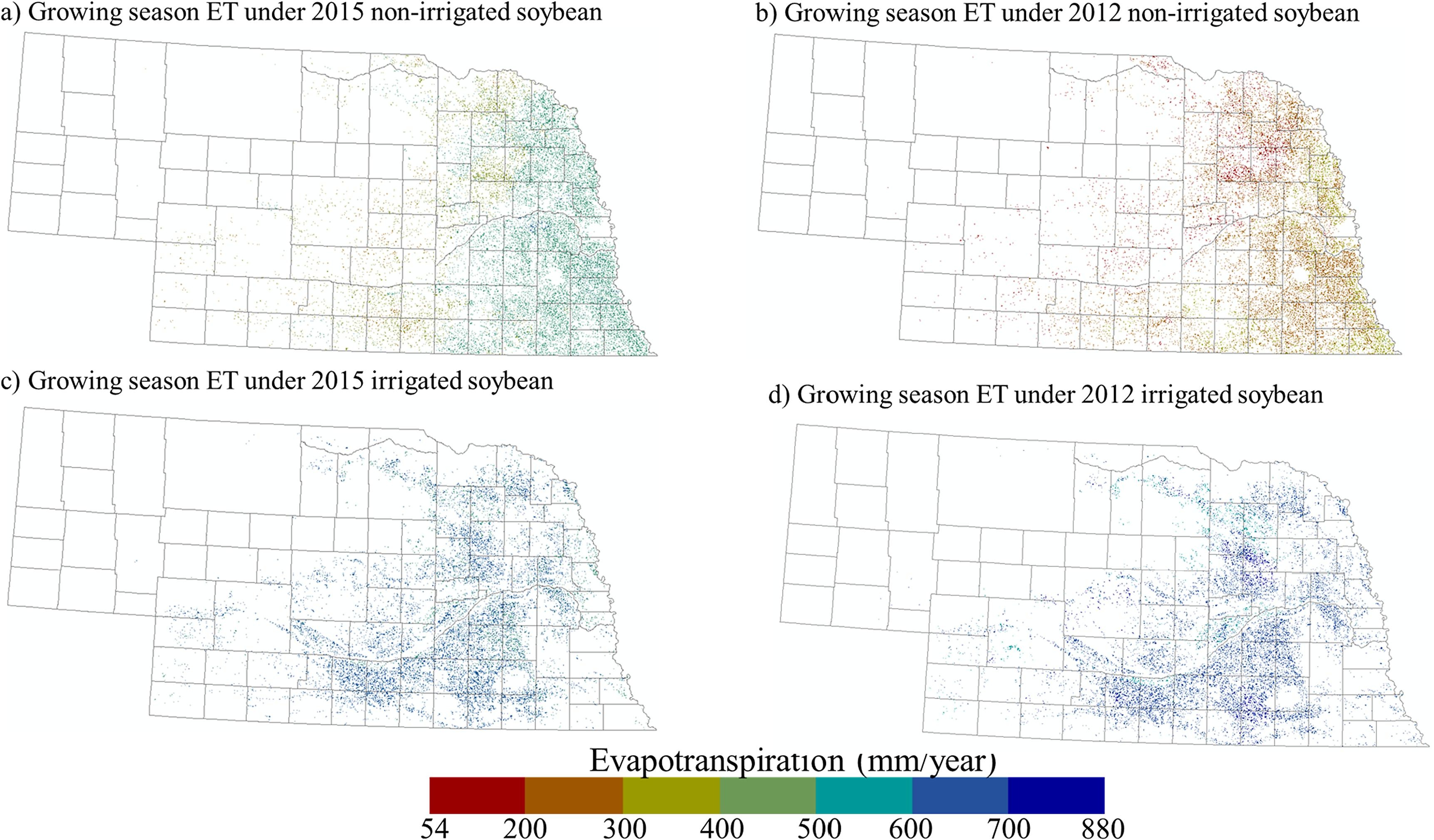 Figure 4. Evapotranspiration estimates from the GEO-CropSim model for soybean crops in 2012 (drought year) and 2015 (non-drought year).