Providing satellite data for everyone to use that has clear food production information in it is really a benefit to everybody. It is one of those neat things that really shows the value of satellite imagery. -Brad Doorn on NASA's Small Steps, Giant Leaps Podcast

The first thing that many think of when they hear about NASA is space exploration. And while that is a major aspect of the Agency’s work, another critical function it fills is agricultural monitoring using remotely sensed data. In fact, agricultural analysis using information provided by Earth observing satellites is one of NASA’s oldest missions. The US, like all countries, purchases and eats food from all over the world creating an interwoven global food system. In the early 1970’s, the world was facing a food crisis and policymakers were struggling to respond as they lacked the ability to easily identify where shortfalls in production were occurring.

In light of this critical information gap, scientists at NASA realized that we could monitor agricultural production using satellites with sensors pointed at the Earth, and so in 1972 NASA’s first satellite explicitly designed for Earth observation, Landsat 1, was launched. With the launch of Landsat 9 in 2021, NASA is currently celebrating the 50th anniversary of its Landsat program. Over the previous half century, Landsat has revolutionized how we view the Earth, inspired numerous other earth observation satellite missions, and enabled decades of research.

As Dr. Doorn explains, this capability continues to be critical in the current day with NASA data informing USDA reports, creating transparency in agricultural commodity markets, and informing response to humanitarian disasters in food insecure countries. This operational capability was particularly useful in responding to the uncertainty caused by the COVID crisis in 2020. With many countries imposing quarantine restrictions and outbreaks causing potential labor shortages, Earth observing satellites allowed scientists and policymakers to monitor global crops in real time throughout the growing season and anticipate production.

Leading Water Resources and Agriculture Research within NASA’s Applied Sciences program, Dr. Brad Doorn has a direct view not just of the impact that NASA has on global agriculture, but on how NASA is building partnerships between federal agencies, international organizations, and individual farmers. As he explains in the podcast, much of this work is coordinated through NASA’s food and agriculture program, NASA Harvest.

“I’m part of what’s called the Applications Research Program of NASA in the Earth Science Division. Applications is all about relationships. It’s about partnerships, because what we’re trying to do is tie these satellites that we have and all this science that we have and trying to collaborate with an end user that’s actually making decisions, whether it’s a farming organization, a water resource organization, an agriculture producer. In so doing, we try to figure out what’s the best way. What are the best partnerships that we can have?

NASA Harvest is, in essence, an experiment in taking a large chunk of an Applied Sciences Program and providing it to a consortium. It’s this big network of organizations that all get together and try to team up and resolve problems. NASA Harvest has in its work now with the G7, with the Agricultural Market Information System, which is trying to help stabilize food, food supply, food prices around the world, is teaming with international agencies, with United States Department of Agriculture, with USAID, our aid agencies, in order to provide information on a monthly basis that can help provide information that may be critical to exports, to imports, to crisis situations like we have around the world today, so that those that are importing, those that are exporting, and those that are consumers can feel ‘OK, I understand the problem, and here are my options.’ Understand the risk, so that there isn’t this vulnerability, this instability caused by uncertainty. That’s what we try to resolve.” -Brad Doorn 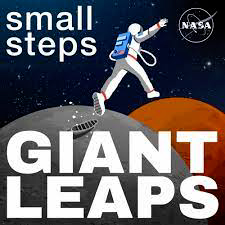 NASA’s APPEL program supports the Agency’s technical workforce by developing curriculum and career development tools. One resource the program produces is their Small Steps, Giant Leaps podcast where they showcase current NASA missions and the project managers, engineers, and scientists who are leading them.

Some of the NASA tools mentioned during the podcast include: OpenET (a platform to measure evapotranspiration), NASA Harvest GLAM (a platform to easily display various forms of earth observation data including, NDVI, soil moisture, precipitation, and temperature over different countries and time periods), and the NASA Harvest Portal (a data repository providing information on global crop conditions, agricultural market information, and farming methodologies).