"The widely accepted idea of a cost-of-living crisis does not begin to capture the gravity of what may lie ahead." António Guterres, the UN secretary general, warned on May 18th that the coming months threaten “the spectre of a global food shortage that could last for years"

There is no doubt that a “cost-of-living”, or fuel and food price, crisis is already well underway.  Since late 2020, low global grain stocks, increasing agricultural commodity consumption requirements, both human and animal, and a hobbled supply chain heaving under pent-up pandemic demand have steadily pushed the price of fuel, grains, vegetable oils, and a multitude of other goods and services into record-high levels. Climate change, agricultural commodity investment practices, and China’s struggle to assure food security for its nation also have significant contributions to today’s crisis.

But the sharp impact of the Russian invasion of Ukraine on February 24, 2022, sent additional shock waves through markets worldwide, as prices surged anew, and an estimated 20 MMT (million metric tons) of un-exported grain stocks from last year’s harvests in both Ukraine and Russia suddenly became inaccessible to global trade due to blocked ports and sanctions. Not only in the short term, the conflict also presents very tangible threats to the availability of future exports from both countries, extending well beyond 2022.  Especially for Ukraine, a failure to monetize existing and newly-harvested crops through trade could financially drain and weaken the country’s entire farming capability for years to come.

But is the world heading for catastrophic food shortages? That’s a big question, and one that will certainly play out in its early stages over the next few months. A smaller and more immediate version of it is playing out now and may help to put some bounds around the bigger question. 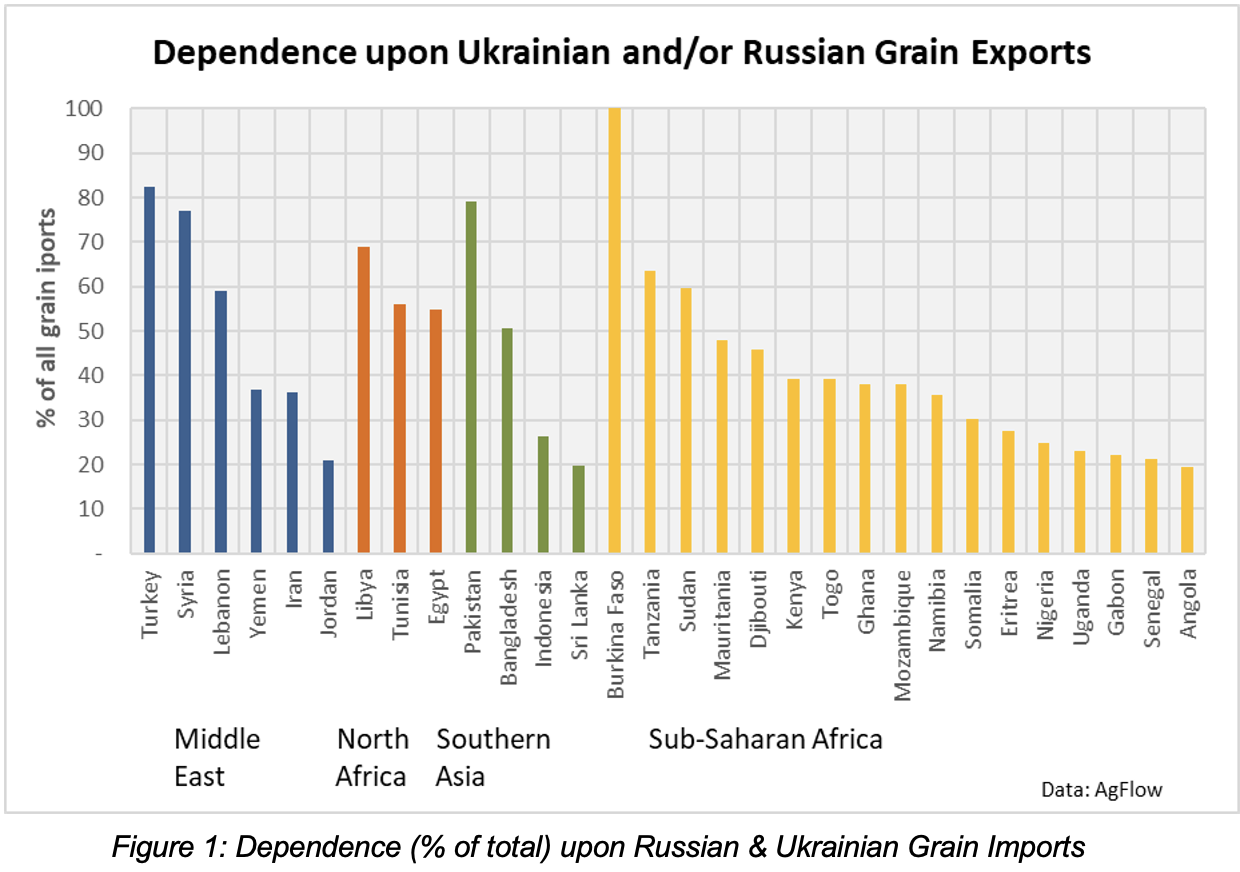 The immediate loss of existing trading relationships and exportable grain stocks from Ukraine and Russia threatens the near-term food supply of approximately 30 African, Middle Eastern and South Asian countries (see Figure 1), all of which are to some degree chronically food insecure and heavily reliant on agricultural commodity imports. Each of these 30 countries source at least 20% of their agricultural commodity imports from Ukraine and/or Russia.  Several live in a constant struggle to finance and procure, just-in-time, enough low-priced staple food to meet the needs of their very restive urban populations, and several are effectively bankrupt.

So, let us resolve the degree to which these 30 countries are able to quickly find alternate commodity export capabilities to meet their import needs. As noted above, much public commentary warns that if they can’t, “shelves will be bare”, and famine could be the outcome for millions.

We are using shipping data available from AgFlow©, which provides ocean vessel-level data and information on the type, amount, and timing of agricultural exports from an exporter to an importer, from 2017 to the present. For each of the 30 countries, we have then compiled their monthly imports of grains and oilseeds over the last 5 years (2017-2021) and compared what they normally import in the January to April period, with what they have actually imported in the same period for the current year, 2022.

The January to end-of-April 2022 period includes two months in which Ukrainian and Russian exports were underway with few abnormal impediments, albeit with increasing concern that conflict might be imminent.  It also includes March and April 2022 totals, during which Ukrainian exports were almost nil, and Russian exports were diminished by a concern for sanctions (although Russian grain exports have risen to near-normal levels by May 2022). Actual grain imports to the 30 countries over the first 4 months of 2022 totaled more than 37 MMT (23.5 MMT average for 2017-2021), of which wheat comprised 23.5 MMT, corn 10 MMT, and just under 2 MMT of rice. 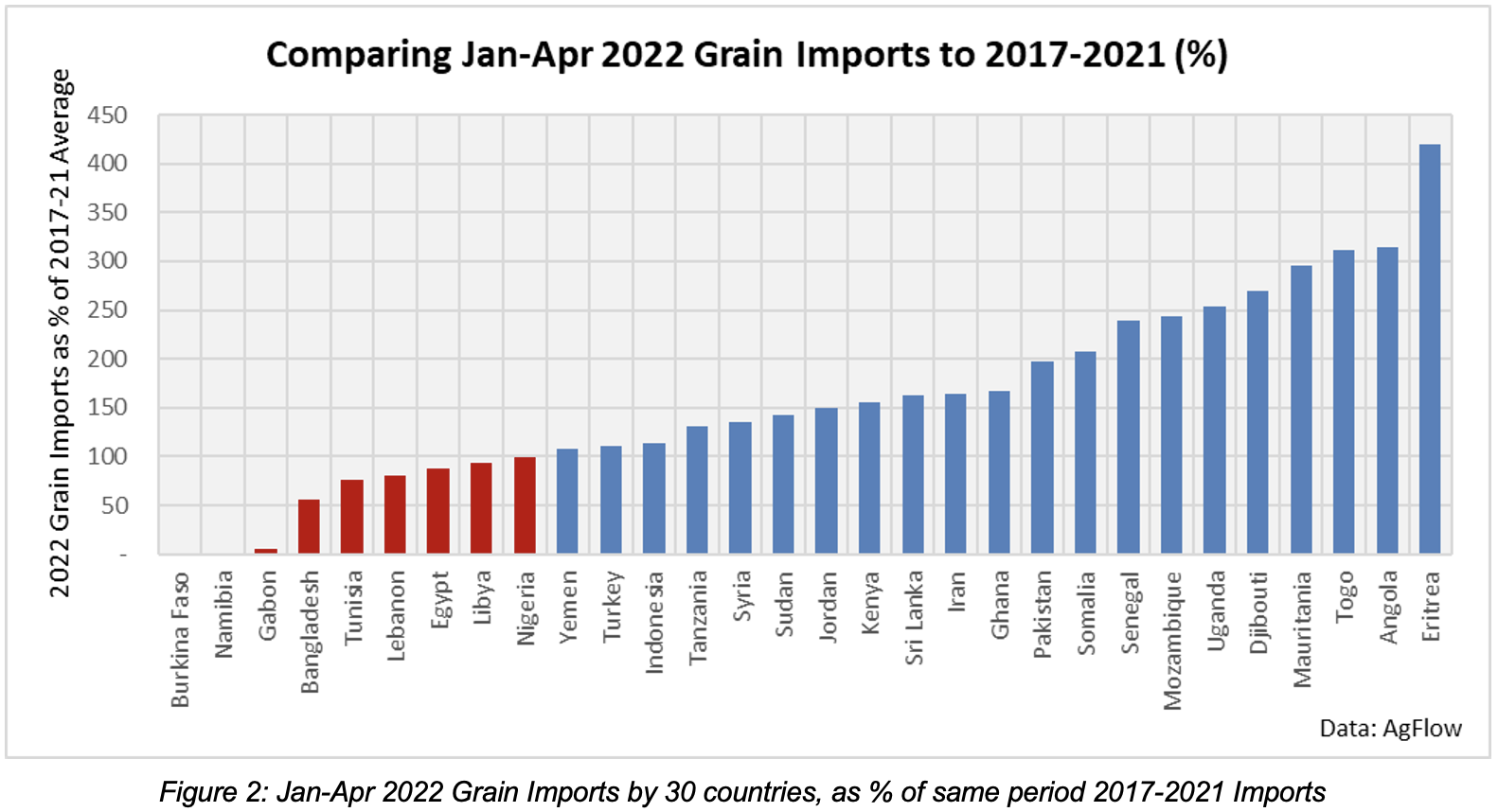 Figure 2 shows that most of the 30 countries procured substantially more grain imports in the January – April 2022 period than they did on average in the January to April period between 2017-2021. Whatever impediments most of them found in replacing the imports they normally contract from either or both Ukraine and Russia did not apparently set back their targets. Those who did not import as much grain as “normal” were Bangladesh (56% of normal), Tunisia (76%), Lebanon (80%), Egypt (87%), Libya (93%) and Nigeria (99.5%).

On the basis of this early data, it appears that the loss of Ukrainian and Russian imports by countries which are heavily reliant on them has not been a major food shortage problem, although somewhat more concern should be for Tunisia and Lebanon, both of which are in the midst of major financial and political crises. Note that early May 2022 data will show that Bangladesh has effectively filled the import gap shown here.

Curiously, or perhaps not, four of these 30 countries - Turkey, Iran, Egypt and Libya - did not have to look beyond their previous grain importing relationship with Russia to meet their post-invasion import needs. In March and April 2022, despite any sanctions that might have deterred some from such transactions, they actually substantially increased the normal tonnage they imported from Russia during these months (Turkey 1.023 MMT, Iran .601 MMT, Egypt .116 MMT, and Libya by 28,000 MT).

Obviously, the above analysis covers a very short period in what may be a long-term disruption of the exports of two of the world’s biggest exporters of grain and vegetable oil, and should be repeated often to detect any rising difficulties in finding and purchasing critical food supplies. But for the moment, a “cost-of-living” crisis is more visible than a food shortage crisis.