As the sun rises on the 40th day of Russia’s invasion of Ukraine, some very important global impacts of the Russian war on Ukraine are becoming clearer. But others remain unanswered.

Both Russia and Ukraine are major exporters of wheat, corn, cooking oils, other grains, and pulses (together, they provide 25% of global grain exports). Russia supplies 20% of the globe’s wheat exports and 2% of its corn. Ukraine provides 12% of the world’s wheat exports, and 20% of its corn.

As of February 24th when the invasion began, at least 13.4 million MT of exportable wheat and 8.5 million MT of corn from last year’s Ukrainian and Russian harvests appeared blocked, unable to move to, or beyond, ports in the Azov and Black seas. This would create a huge gap in the world’s wheat and corn supply. Perhaps worse, if the yet un-exported stocks were not cleared soon from their silos, railcars and ports, they would impede the movement of upcoming new winter- (June-October) and spring-crop harvests (August-October) towards numerous markets in North Africa, the Middle East and Asia. The immediate worry was, of course, would any other producers be able to make up this gap in exports? 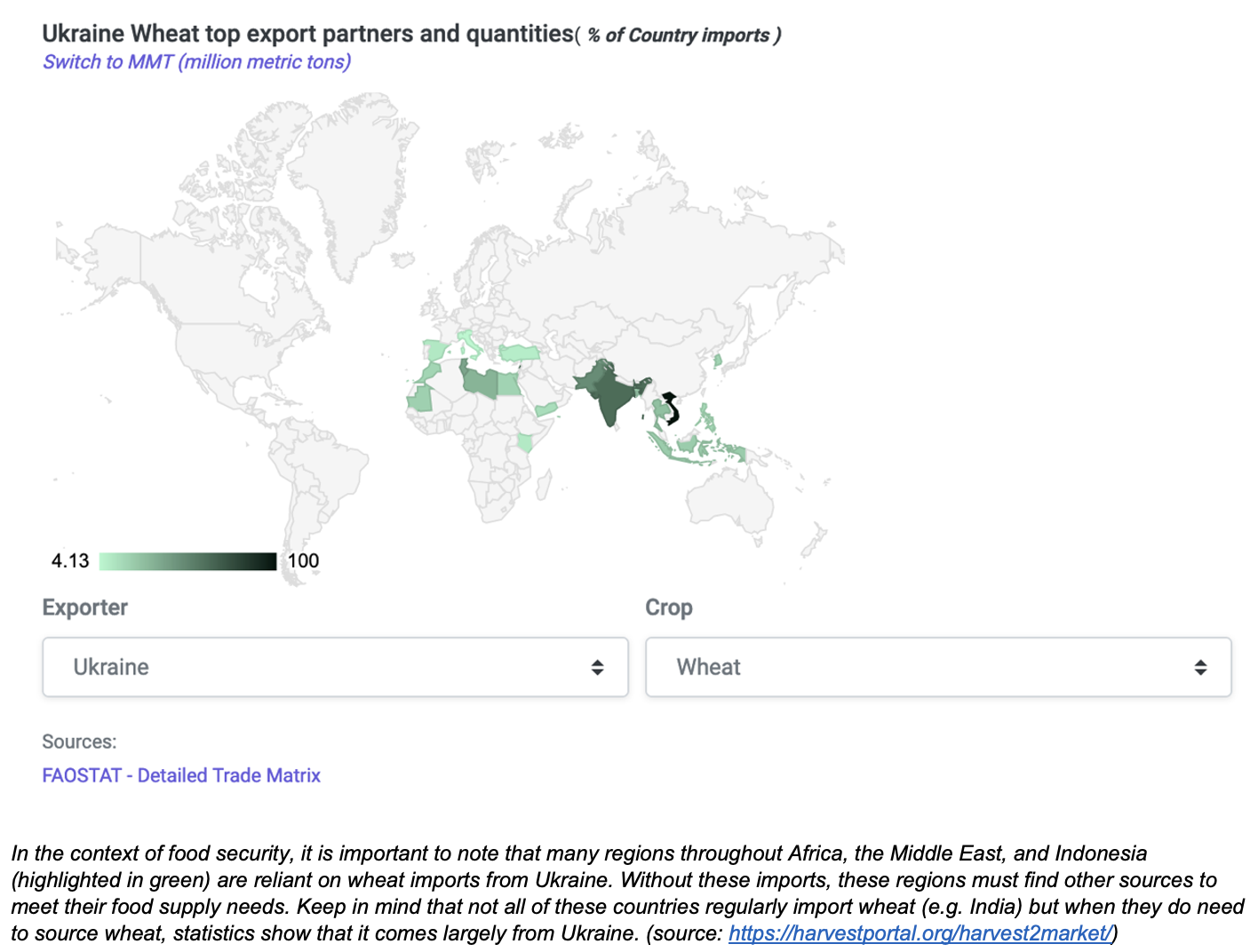 In a world already struggling with extremely high food prices, the sudden potential loss of Ukrainian and Russian wheat exports, and great uncertainty about wheat crop condition still in the ground in the northern hemisphere and China, sent a stiff jolt of panic through world grain prices. US wheat prices shot up by 42% within the first week after February 24. They remain volatile but have dropped to 23% above pre-invasion prices. Estimates of exportable stocks in other countries are being re-assessed, and changes in weather, fuel price, and market conditions are being watched very carefully. Corn prices rose 10% during the same month and have remained, for the moment, relatively stable. Nevertheless, they, and other key food, fodder, and vegetable oil crops are being buffeted by similar supply uncertainties and remain a serious threat to future food prices.

After February 24, countries that normally rely heavily on Russian and Ukrainian exports to meet their own consumption needs were forced to quickly find, figure out how to pay for, and try to adapt their existing supply chains to new sanctioned credit and banking systems, to enormous pre-existing transport constraints, as well as to different grain qualities, moisture standards, and phytosanitary requirements for alternate-source grain exporters. 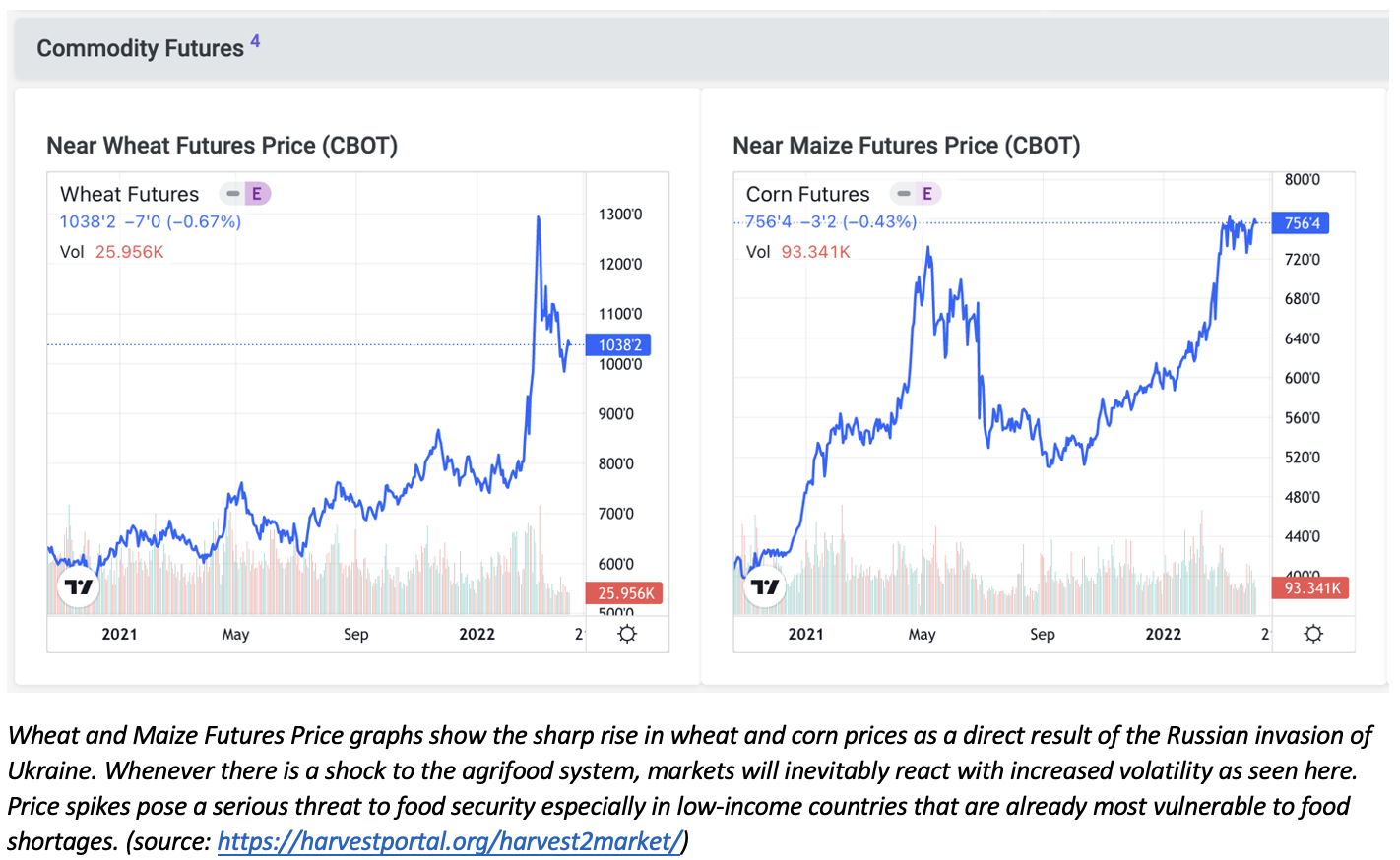 Among the countries most challenged by the expected Ukraine and Russia wheat supply gap was the world’s largest importer of wheat, Egypt, which normally purchases as much as 12.5 million MT from Ukraine and Russia. Six other wheat importers, all heavily-dependent on Black Sea imports, faced immediate and very serious food security risks if breaks were to occur in their imports of wheat. Lebanon, whose principal wheat storage facilities were wiped out in the 2020 port explosion, can now only store about 60,000 MT of wheat, while its monthly consumption requirements are generally at least 50,000 MT. It therefore lives a nervous hand-to-mouth import schedule, trying to immediately replenish what it just consumed. Unfortunately, in recent days, the country’s central bank has appeared to be either bankrupt, or near it. This would, of course, be an enormous handicap in meeting its wheat import needs, despite help being offered by some of its neighbors.

Tunisia, Libya and Turkey are all struggling with a potent Arab-Spring-like mix of exploding food prices and civil discontent. Nevertheless, their immediate monthly wheat import needs have been met from France, other small exporters, and, in the case of Turkey, by Russian exports of wheat.

In several tenders held in March, Turkey contracted for almost 1 million MT of wheat, and most of that appears to be coming from Russia. The best guesses of how much wheat was exported from Russia during March indicate the amount (>2 million MT) was not far below what would normally be expected at this time of year. Egypt, after cancelling a tender for wheat in early March due to a lack of offers and high prices, now appears to have been successful in acquiring wheat from several sources, including Russia, and is reported to have enough stocks to cover it needs through most of the calendar year. It is also reported to be in discussions for additional major imports from India.

Yemen and Sudan, which are already two of the most food insecure and conflict-wracked countries in the world, both remain hobbled by wheat and other critical food import needs which have not been met. Unfortunately, in their violent and chaotic condition, the availability of alternate grain supplies is perhaps not going to receive all the priority it merits.

As noted by Ukraine, the World Food Program, and others, the war in Ukraine is pushing already sky-high staple food prices higher, and food stocks lower in many of the world’s most food insecure places. In that respect, it has the potential to be a major cause of increased malnutrition and excess mortality in many places. This stands as a sobering reminder that in a globalized economy, even localized conflicts can potentially lead to human losses far from the battlefield which may equal or even exceed those occurring on the battlefield.

The war is also stimulating related dialogue about the risks of globalization, whether it be a global dependence upon only two countries for semiconductors, on a few countries for rare earths, or in this case, the world’s poorest populations relying on a shrinking number of excess food producers.

Other, perhaps more narrow issues are coming to the fore and remain to be sorted out. Was the feared total loss of Russian and Ukrainian wheat exports, and the resulting pricing panic that was set off, based upon enough information about global stocks, both in the ground and in storage facilities? India has now indicated that it expects to deliver 10 million MT, or more, of its huge wheat stocks in 2022 and 2023, an amount which probably covers most of the assumed Russia/Ukraine gap. Why was that possibility not more prominent in the market’s price-setting? 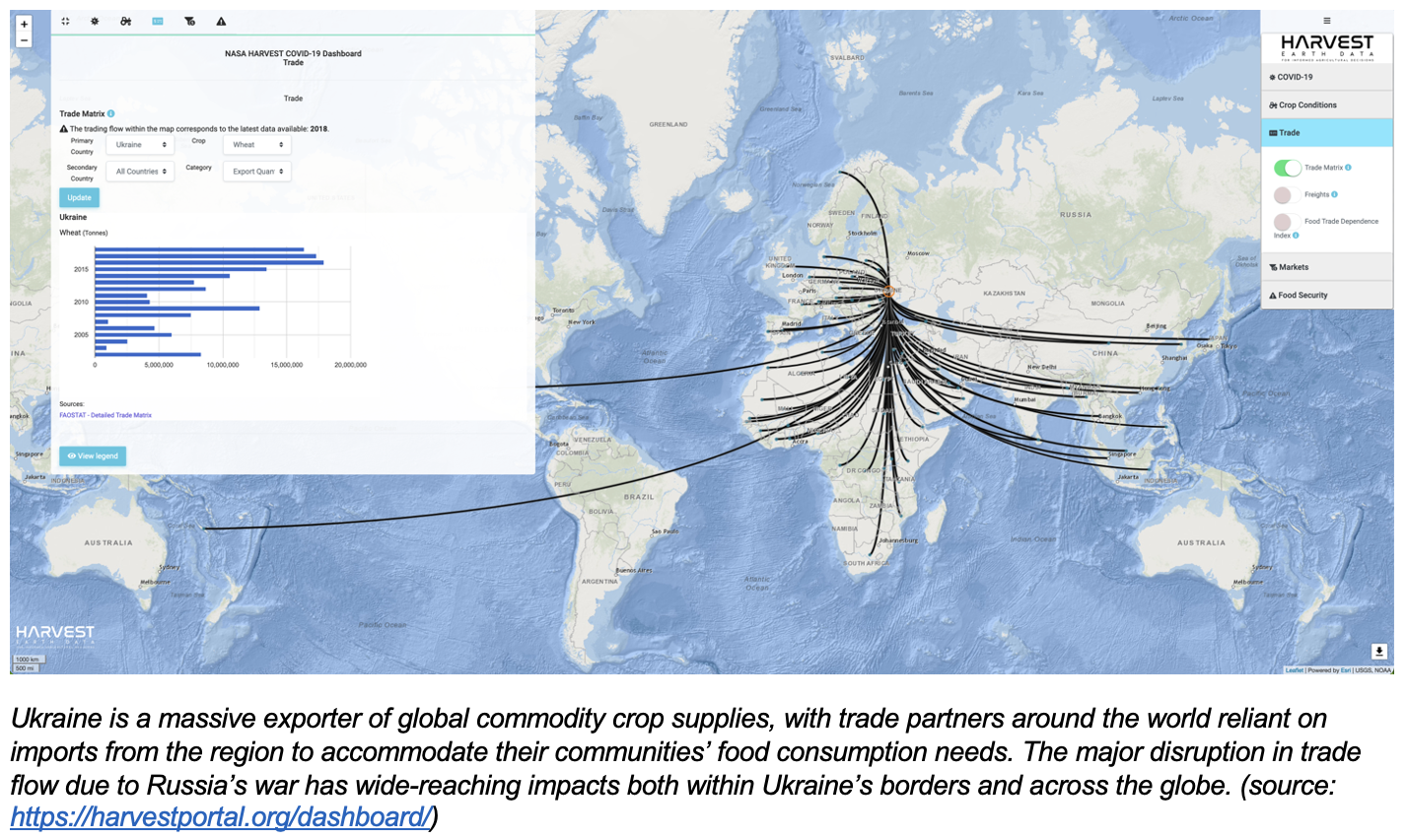 Major corn harvests around the world will be occurring soon. Are we sure that actual and imminent corn stocks will be accurately assessed, and thus prevent over-reactions to the perceived supplies of that huge source of the world’s food? How far into the world’s available food stocks will China need to penetrate if its own wheat harvest is as bad as it indicates? Are there similar features we may be missing about global supplies of cooking oil, fertilizer, oil, gas, and any number of other currently scarce, and rapidly becoming more expensive, commodities?

As the war grinds on, the longer and more deadly it becomes, the more irreversible some of the damage will be, both in Ukraine and in many of the other most vulnerable areas of the world. All these lingering questions highlight the importance of increased market transparency and real-time analysis of crop conditions, agricultural supplies, and supply chain logistics, as well as coordinated responses among government agencies, humanitarian organizations, research entities, and academic institutions. 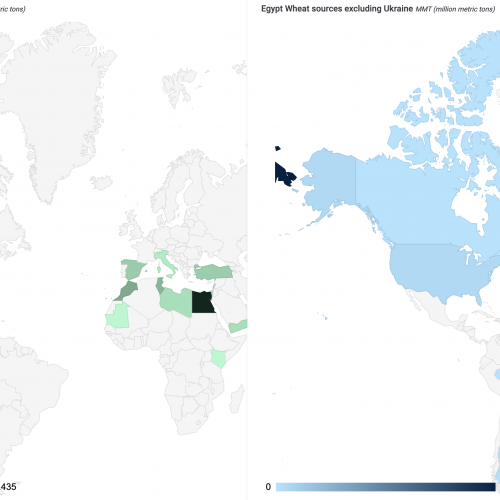