GEO is an international partnership consisting of more than 100 national governments and over 100 participating organizations. GEO’s goal is to better integrate the various earth observation (EO) systems in place around the world. The organization is working to create common standards that will allow the connection of existing infrastructures and improve the sharing of EO data. The CM4EW is published under  GEOGLAM (GEO’s Global Agriculture Monitoring Initiative), a flagship initiative of  GEO focused on the advancement of global agricultural monitoring through the use of  Earth observations.

Justice’s award noted her “exemplary leadership, building the GEOGLAM Crop Monitor for Early Warning community. Her leadership has resulted in innovative approaches to food security monitoring that are inclusive, transparent, and highly impactful.”

This international community of remote sensing, agricultural, and regional experts created under CM4EW and led by Justice have published monthly reports since 2016 on agricultural conditions across the countries at risk of food insecurity.  The CM4EW reports have shone spotlights on emerging crises numerous times including developing droughts, flood impact and damage, extreme events, and pest outbreaks in different regions of the world providing critical consensus based information to decision makers and supporting early action in support of food security.

One recent special report from CM4EW released in May 2022 alerted to the unprecedented 4th consecutive poor rainfall season likely for the Horn of Africa during the main cropping season and risk of 5th consecutive season for Fall 2022 according to forecasts produced at the time which have since been realized across the Horn with significant food security impacts in the region. This report was critical in providing consensus based information to decision makers in the region in advance of these events being realized. 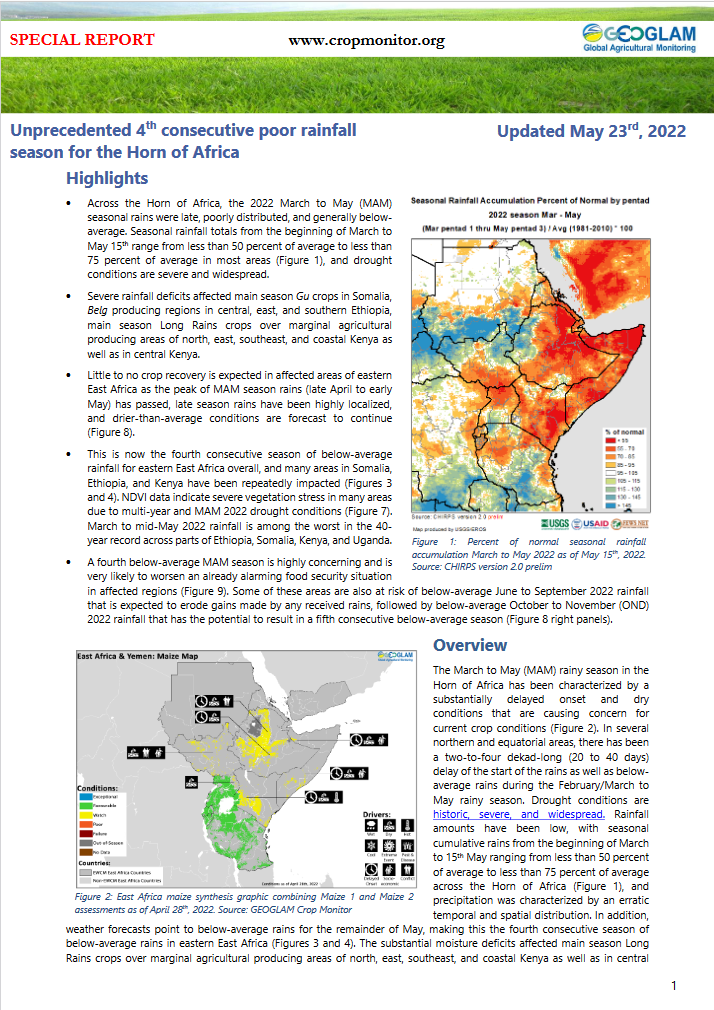 “Climate change, natural disasters, conflict, and numerous other factors can impact agricultural production at scale with the greatest impacts felt at the local level. The Crop Monitor for Early Warning provides timely and consensus based  information on crop conditions and development that allows policymakers to act quickly before humanitarian crises arise.” Justice said, “I’m so pleased that the GEOGLAM Crop Monitor for Early Warning and its strong community has been recognized for its important work and I’m grateful to the GEO community for honoring me with this award.”

We previously covered Christina Justice and her work in our “People of Harvest” series in 2021. Read more about how she got into agricultural monitoring, her current work, and future directions.