Delayed Rainy Season: An Indicator of Drought in Sub-Saharan Africa

Delayed Rainy Season: An Indicator of Drought in Sub-Saharan Africa

It is a well-established fact that where there is drought, there is potential for insufficient food supply. Crops are highly reliant on ample water supply, so identifying early warning indicators of drought is paramount to preparing some of the world’s most food-insecure regions for potential agricultural deficits. NASA Harvest partners at the University of California, Santa Barbara’s Climate Hazards Center (UCSB CHC) set out to analyze the relationship between the onset of rainy seasons and the probability of drought in Sub-Saharan Africa’s most vulnerable regions. With acute food insecurity on the rise and inadequate nutrition affecting millions of people throughout Africa, Dr. Shraddhanand Shukla is leading an effort to apply rainy season onset dates as an early warning indicator for food insecurity. Research findings show that A slow rainy season onset is a reliable harbinger of drought in most food insecure regions in Sub-Saharan Africa, which has recently been published in PLOS ONE journal with contributions from the UCSB Climate Hazards Center experts Greg Husak, William Turner, Frank Davenport, Chris Funk, Laura Harrison, Natasha Krell, and Juliet Way-Henthorne.

Because climate-driven drought is one of the primary drivers of acute food insecurity — a lack of consistent access to enough food for a sustainable and healthy life — it is critical to monitor and appropriately mitigate the potential effects of drought on agricultural supplies. With this in mind, the team of experts is able to demonstrate that a delayed rainy season onset can reliably warn of agricultural drought conditions. In this case, agricultural drought was measured using the peak Normalized Difference Vegetation Index (NDVI), which is observable via satellite imagery and indicates the level of greenness (e.g., vegetation health) present in a particular area. Supported by data from the United States Agency of International Development’s (USAID) Famine Early Warning Systems Network (FEWS NET) and the U.S. Geological Survey’s Earth Resources Observation and Science (EROS), the team was able to analyze an expansive amount of satellite data and link this imagery to the onset of rainy seasons and known severe drought conditions, ultimately enabling them to quantify the relationship between the start of rainy season and agricultural droughts throughout Sub-Saharan Africa. 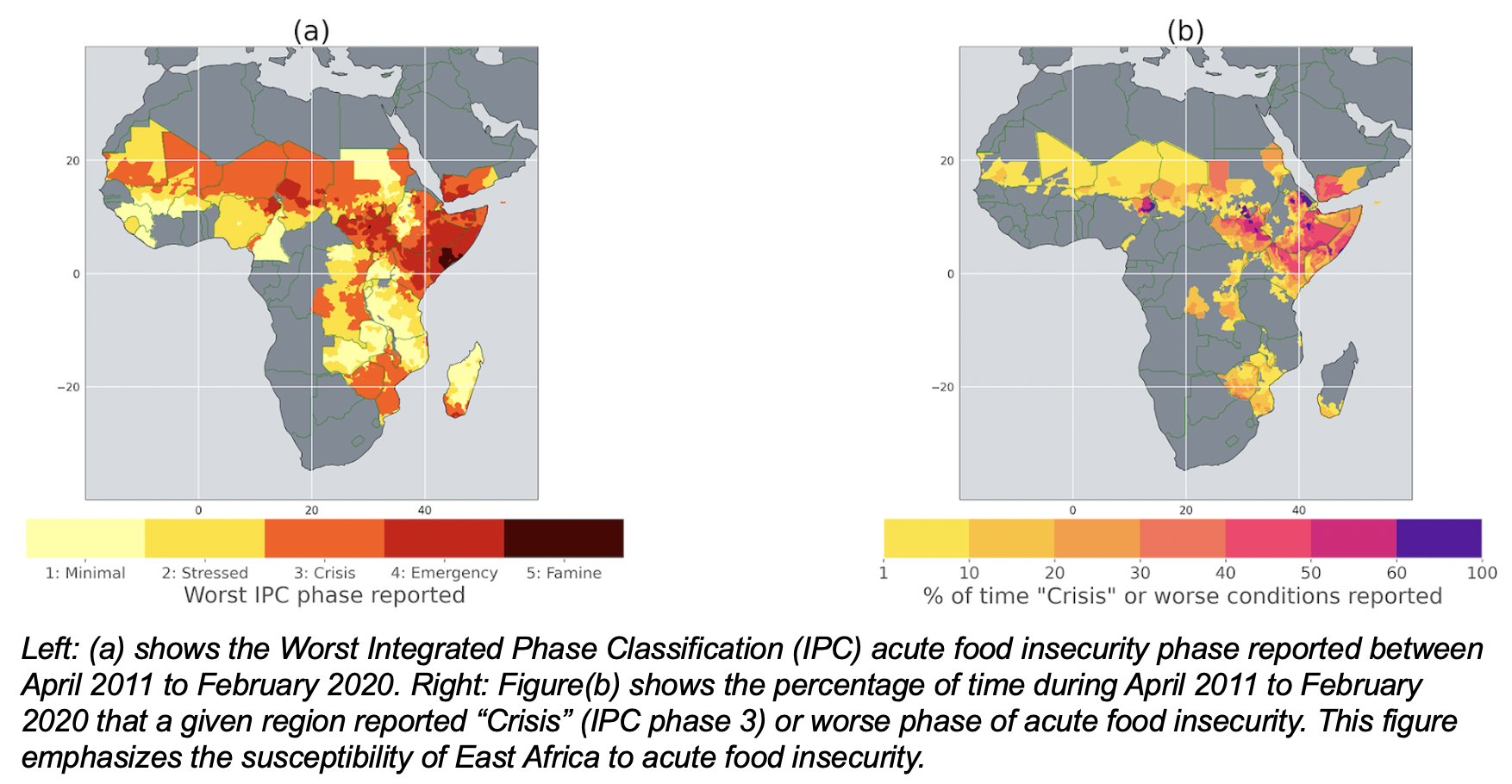 Results show that, particularly in areas at already heightened risk of food insecurity, a rainy season delay of just 10 days can double the chances of agricultural droughts, and a 20-day delay is a strong indication of upcoming agricultural drought. Thus, by carefully observing rainy season onset dates prior to the start of a particular agricultural season, stakeholders are alerted to the potential of drought and food insecurity well in advance of actual decreased agricultural production. By using this method of observed rainy season onset as an early warning tool to trigger mid-season interventions, farmers and governments can better prepare for and respond to non-ideal agricultural conditions in order to properly feed their communities. Whenever there is an opportunity to improve early warning systems, like those seen in this study, there is also an opportunity to take mitigation actions that improve human livelihoods and ultimately support a more food-secure world.

Read the full publication in PLOS ONE for additional details on the scientific methods and outcomes of this work.