Evaluation of the Damaged Fields from 2020 Iowa Derecho

Evaluation of the Damaged Fields from 2020 Iowa Derecho

The state of Iowa is the biggest producer of corn in the U.S. and is number two in soybean production, following only Illinois in total production of this staple crop. In 2019, about 13.5 million acres of corn and 9.2 million acres of soybean were planted over Iowa for the 2020/21 season, according to the United States Department of Agriculture’s National Agricultural Statistics Service (USDA-NASS). Furthermore, last year Iowa produced roughly one-sixth of the nationwide corn yield and one-seventh of nationwide soybean yield (re. USDA-NASS).

On August 10, 2020 a series of intense and fast-moving windstorms, known as a Derecho, caused widespread damage across Iowa’s agricultural regions. This severe weather event bent and flattened crops over approximately one-third of the state (Figure 1).

Immediate evaluation of the disaster and generating maps showing the damaged fields was critical to enabling rapid-response actions of government agencies and insurance companies. Given the very large area impacted by the disaster, using satellite imagery stands out as the most efficient way for monitoring and evaluating the area. The European Sentinel-1A and 1B satellites are Synthetic Aperture Radar (SAR) satellites which provide cloud-free data. In the Interferometric Wide swath mode (IW), Sentinel-1A and 1B have a swath width (i.e. ground coverage) of 250 kilometers and spatial resolution of 5 meters by 20 meters. This wide swath width is important and helpful for monitoring crop lands over large areas. Each of these satellites has a revisit time of 12 days with their constellation providing a potential revisit time of as frequent as 6 days. SAR signals are highly sensitive to the geometry and structure of the crops, making them an interesting source of data for monitoring the damaged crops over the Iowa Derecho trajectory. Sentinel-1 data from July 29, 2020 to August 22, 2020 were used by the NASA-Harvest group to detect the impacted fields. In response to the need for quick evaluation of the damage, an in-season crop type map has been generated using a combination of harmonized Landsat-Sentinel and Sentinel-1 data. The Harvest researchers used the intersection of the crop damage map and the crop type map to provide the overall damaged area map for each crop type (Figures 2 and 3). In total, 2.59 million acres were analyzed, concluding that 1.99 million acres of corn and 0.6 million acres of soybean were impacted by the storm. 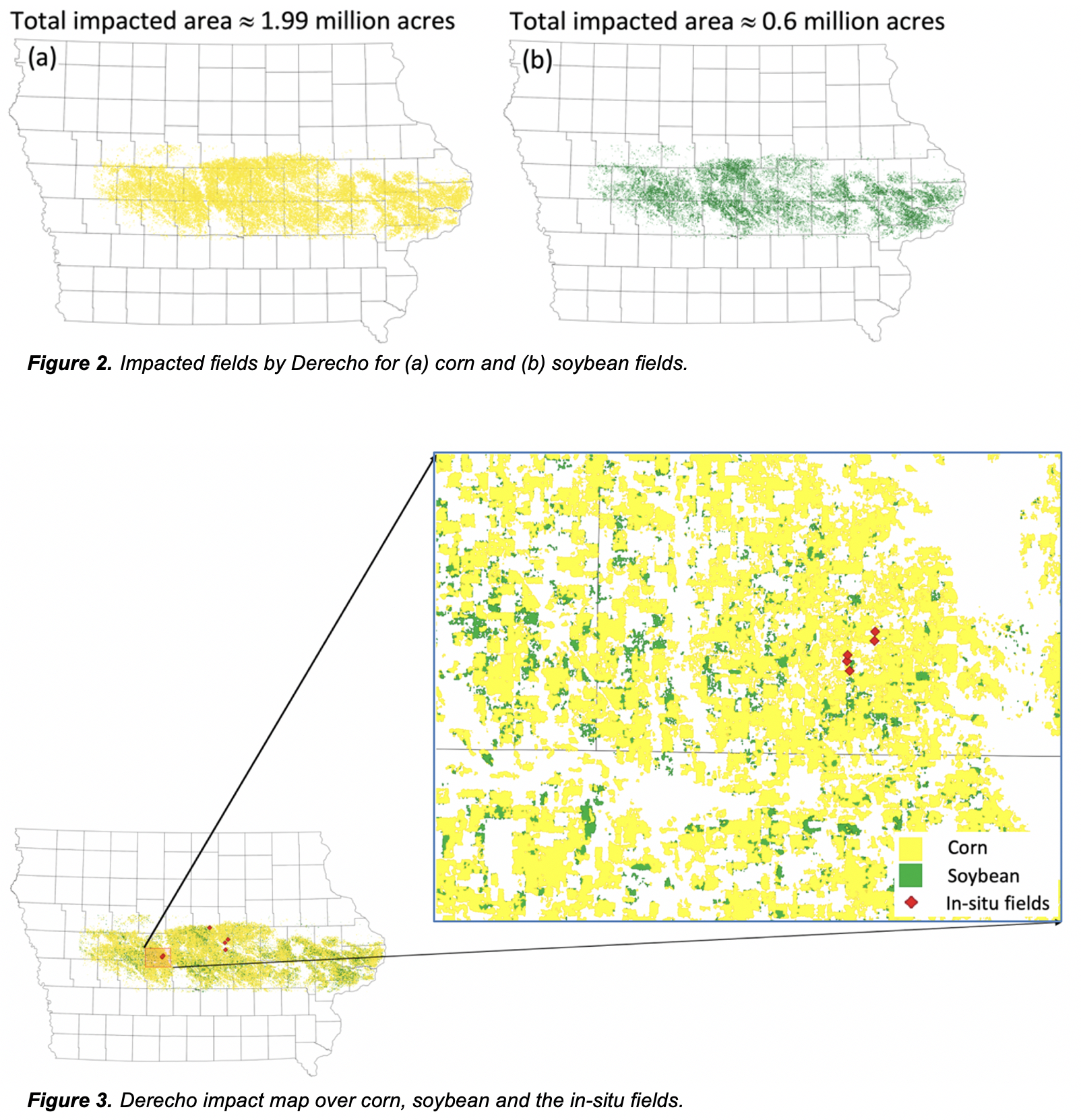