Soil moisture is a vital variable for monitoring crop health and predicting yields. Plants use water for temperature regulation as well as growth and a lack of water in the soil can negatively impact a plant’s ability to reach its potential growth. When it comes to agriculture, this translates into decreased crop productivity or smaller yields. Members of the NASA Harvest team recently co-authored a paper developing new methods for monitoring soil moisture using a combination of machine learning models and satellite-based radar waves.

The importance of water content in the soil of cropland is well known, as are the consequences when moisture levels are inadequate. As a recent example, Brazil, a major corn exporter, is suffering from decreased precipitation which has led to drought conditions and low soil moisture across much of its agricultural land. These conditions caused the country’s spring-summer corn crop, which accounts for ~70-75% of Brazil’s total corn production, to see yields almost 20% lower than initially expected. These narrowed yields were foreshadowed by soil moisture data collected by earth orbiting satellites that had been monitoring the situation throughout the year.

This image from NASA Harvest’s GLAM system, shows how the observed soil moisture in corn growing areas in Brazil this previous May compared to the average values observed during the previous 5 years. It shows significantly lower soil moisture values this year, corresponding to smaller yields. 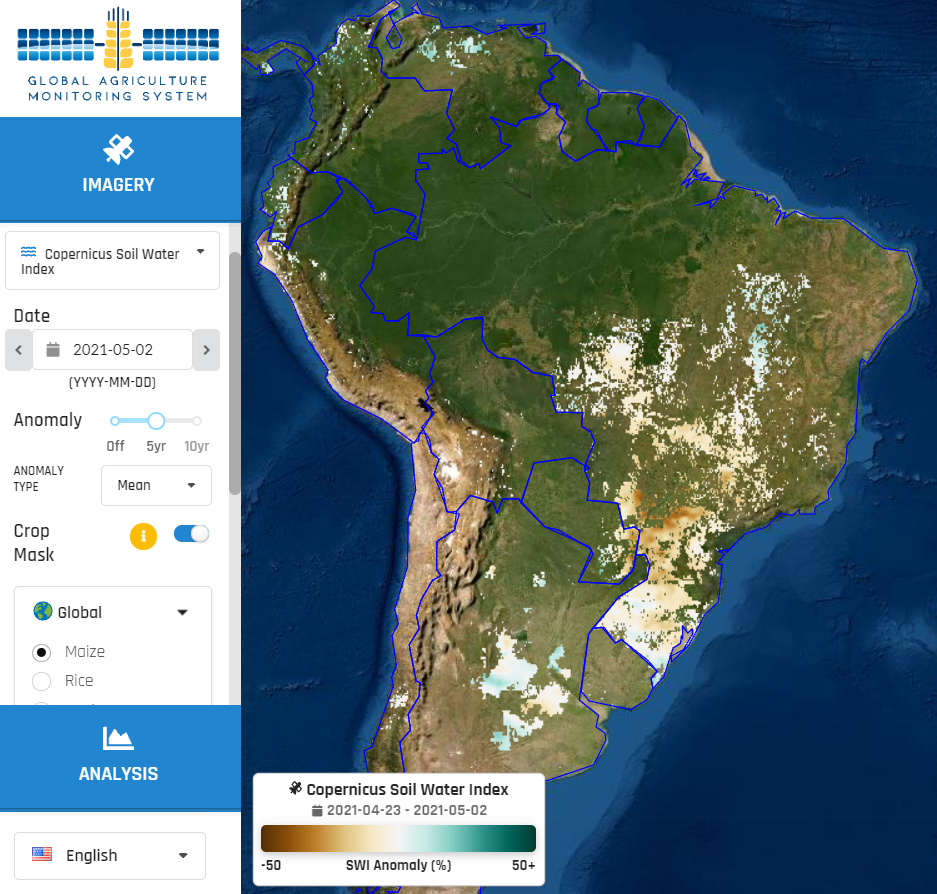 Soil moisture values in early May 2021 are noticeably lower than average values of previous years. From the NASA Harvest GLAM system.

Because of soil moisture’s importance as a crop predictor, agriculture-focused researchers have developed a number of methods to measure the variable. While in-person ground sampling provides the most accurate results, due to the highly heterogeneous spatial and temporal variability of moisture content across the ground, this method is often not feasible. Remote measuring methods utilizing earth observation (EO) satellites are a great alternative as they greatly reduce labor and resource constraints associated with ground-based methods.

One form of EO data, Synthetic Aperture Radar (SAR), is particularly preferred for its ability to see through cloud cover, increasing the number of ground observations. SAR satellites work by sending out radar pulses towards the surface of the earth and recording the amount of signal that bounces off of the surface is intercepted by the satellite’s sensor. This lets us build models to measure the water content in the soil as SAR signals are highly sensitive to soil dielectric constant. A number of studies have shown SAR’s usefulness in measuring soil moisture over bare soil, however data is less easily interpretable over cropland as crops can block the radar from fully reaching the ground and affect how it reflects back to the sensor.

The locations of the soil moisture monitoring stations shown on a UAVSAR image near Carman City, Manitoba

Results found that both neural network models outperformed the SVM, with the GRNN having the most accurate measurements. Further adding to the preferability of the GRNN is its simplicity. The SVM and MLP NN models require a number of parameters to be finetuned, while the GRNN has only one parameter that must be adjusted. The authors note that this simplicity combined with its high accuracy make the GRNN a good choice for future soil moisture monitoring applications.

While GRNN proved to be a successful model for this region, the research team notes that monitoring soil moisture accurately can vary based on ground conditions and so future studies are needed for different soil textures and crop growth stages. Fortunately, given this method’s success with ground data, future research could more reliably utilize passive microwave soil moisture monitoring platforms in lieu of ground data collection - greatly increasing the types of landscapes and agricultural production available.