Any time there is a drought in a major food exporting country, there is heightened concern for agricultural production as well as a threat to both global food security and food market stability. Partners and member organizations of the NASA Harvest Consortium and the GEOGLAM Crop Monitor initiatives are pairing Earth observation data with agricultural community resources and expertise to closely monitor the state of food production around the world, especially in the face of a changing climate. Due to persistent and expanding dryness in the United States during the current 2021 northern hemisphere growing season, there is concern for spring-planted wheat, maize, and soybean crops. The US is the largest producer of maize, the second-largest producer of soybean, and the fifth-largest producer of wheat globally, thus negative crop outcomes could have global repercussions.

This highlights the importance of consistent monitoring of consensus conditions that are provided monthly by resources such as the AMIS Crop Monitor, the Crop Monitor for Early Warning, and the many other crop condition analytics available today thanks to advancements in Earth observation technology and expert analysis. In line with the recent reports released by USDA the Crop Monitor shows just one example of their utility extending to regions outside of the US where there is often much less on-the-ground information. As technology continues to advance and inter-organizational collaboration increases across the agricultural sector from early warning to market monitoring to crop condition analysis and beyond, we will see continued improvements in our ability to have more accurate and timely in-season crop estimates.

What Do Satellite Data and Expert Consensus Tell Us About the Developing Drought?

Above-normal temperatures and below-average cumulative rainfall are currently contributing to the degradation of crop conditions in the US. As of mid-summer 2021, persistent dryness has expanded to the Pacific Northwest, the far northern and southern extents of the Great Plains (particularly around the Dakotas), and into the Midwest, including much of the US’s agricultural powerhouse in the northern Corn Belt. However, in the central and eastern regions of the Corn Belt, conditions are mixed with some areas experiencing degradation due to dryness while others saw improvement with some past heavy rainfall.

Following the recently-released July and August Crop Monitor Reports, GEOGLAM and NASA Harvest are continuing to monitor the developing situation. Crops such as spring wheat, maize and soybean entered their critical phenological periods and regular updates are critical to track conditions closely during this crucial developmental stage. The most recent official Crop Monitor Reports released on August 5, 2021 provide additional detailed updates to crop conditions. Overall, agricultural experts and scientists are monitoring critical agricultural areas throughout the US that are being affected by dry conditions and unusually high temperatures, visualized in the pie charts below.

Currently, spring wheat is in the midst of the critical phenological period of flowering and conditions are deteriorating due to continuing dryness and high temperatures. Additionally, there are portions of severe and extreme drought in important wheat-producing states such as North and South Dakota in the High Plains. The data visualized in Figure 1 underscore several key agricultural indicators, including lower than average NDVI (an indicator of crop health), anomalous precipitation (lower than the normal amount of rain), and much lower than average soil moisture. When compared to previous years, these data  highlight critical differences in environmental conditions that are likely to have negative impacts on crop production. 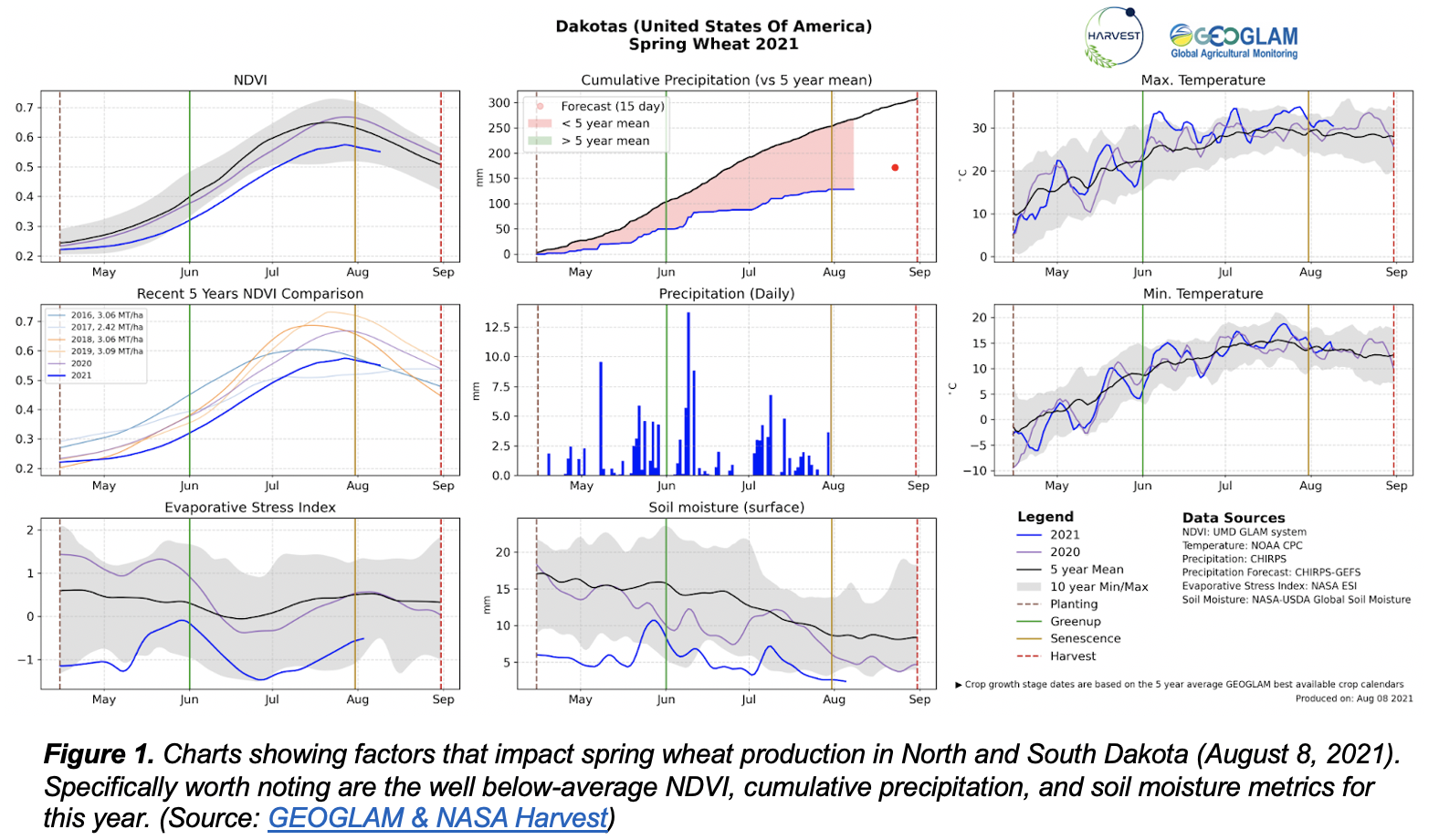 Regional Focus Area: Midwestern US and the Corn Belt

Across the Midwestern US and the Corn Belt regions, main-season soybean and maize crops are developing under what’s referred to as “mixed conditions,” meaning there are several factors in play that impact crop development, some positive and some negative. On the negative end of the spectrum, there is growing concern in northern and western areas of the Midwest and the northern part of the High Plains that crop conditions will continue to degrade as hot and dry conditions persist, particularly in the Dakotas, Minnesota, and Iowa.

The affected region encompasses approximately half of US maize production (in Iowa, Illinois, Nebraska, and Minnesota) and one third of US soybean production (Iowa and Illinois). Agricultural experts are also raising additional red flags given the increase in dry conditions in Nebraska and moderate to severe drought present in Minnesota and Iowa (Figure 2). 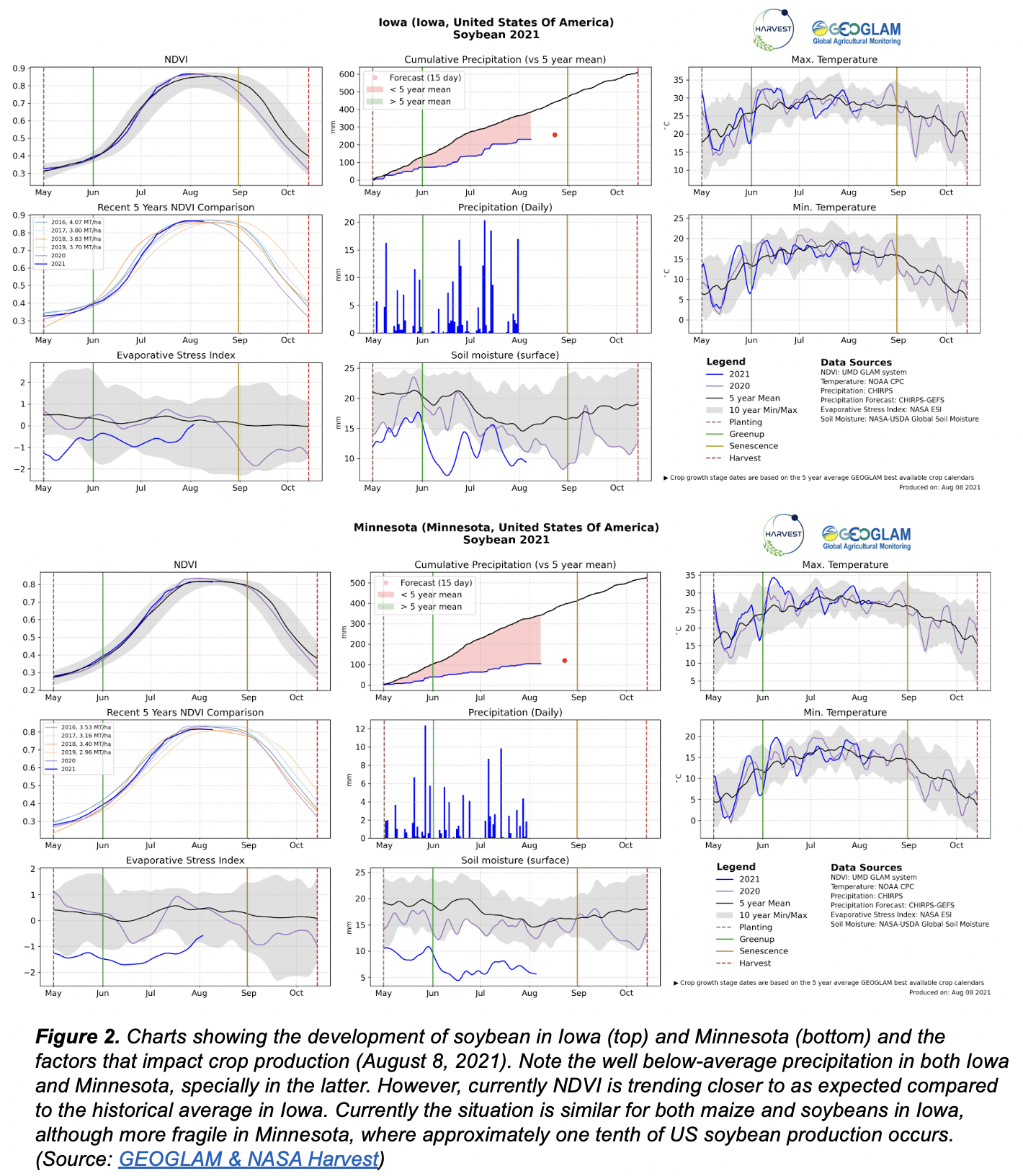 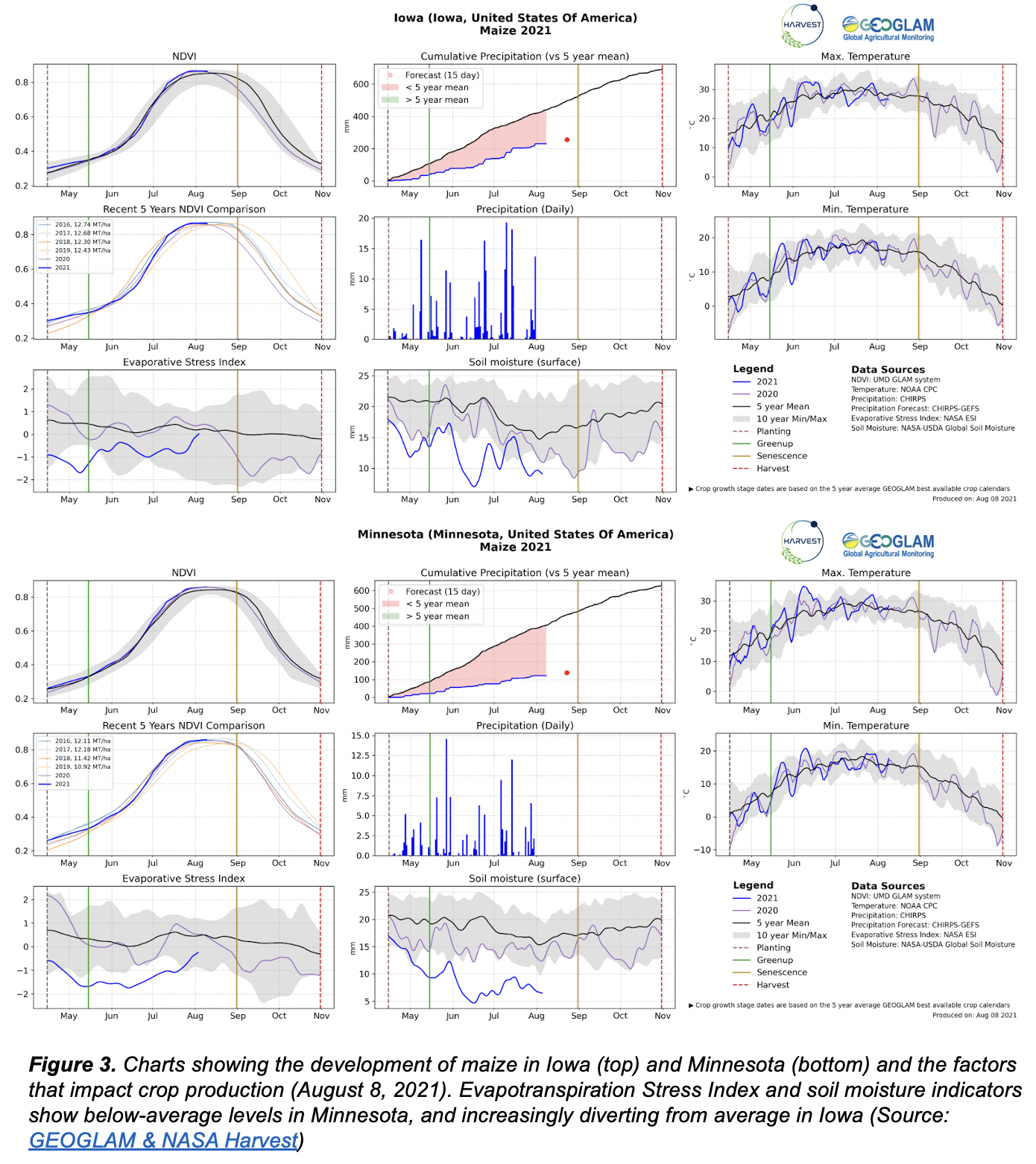 Both maize and soybean are in their critical reproductive stages (or just past those) and while crops might be resilient to most stressors through early reproductive growth, it is important to monitor the situation on a week-by-week basis. Conditions could worsen rapidly if current precipitation and temperature levels persist. This frequency of monitoring can be achieved using some of the Earth observation tools developed by NASA Harvest and GEOGLAM, including the GEOGLAM Crop Monitors and the NASA Harvest GLAM 2.0 (Global Agriculture Monitoring 2.0) system. 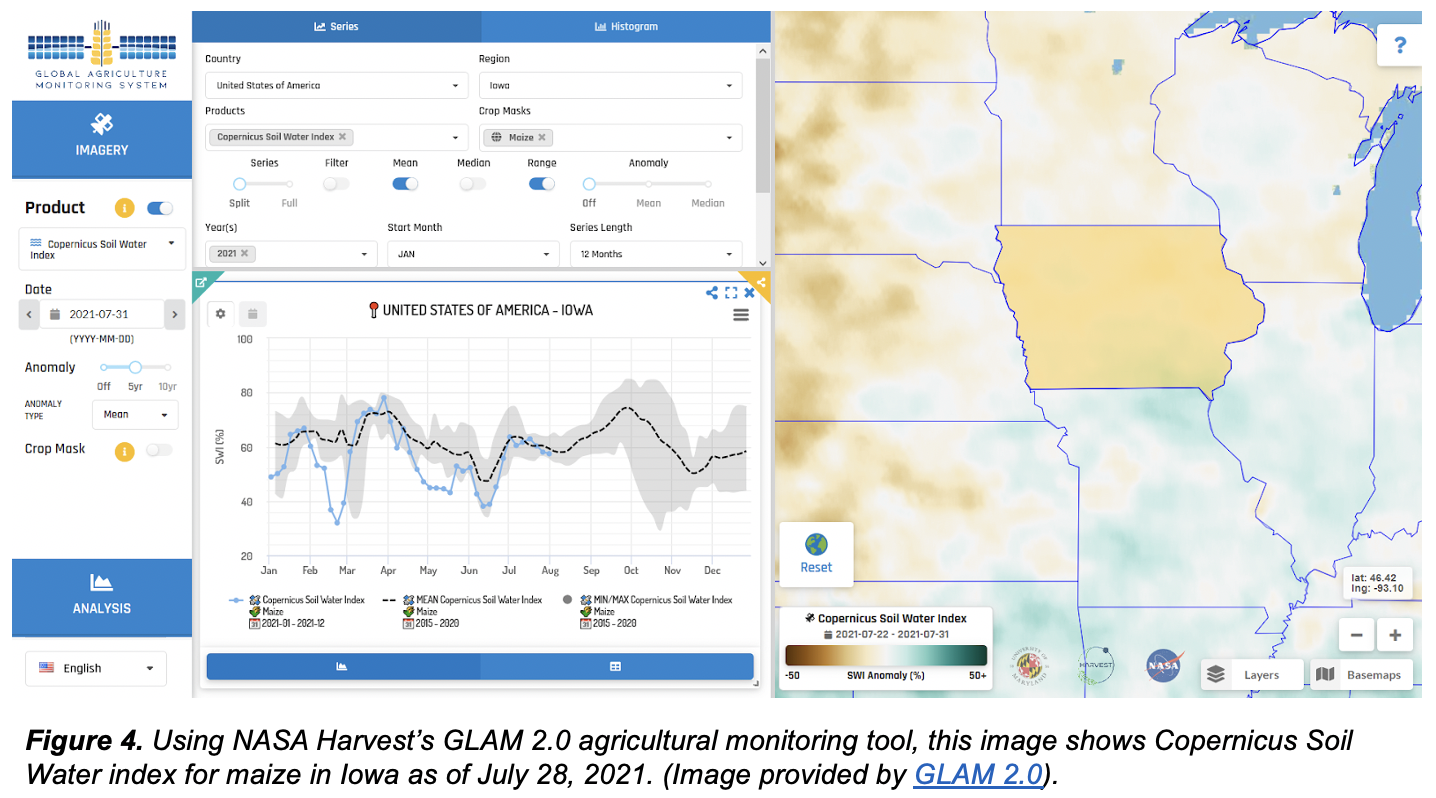 Looking Ahead: Summer 2021 Precipitation and Temperature Outlooks in the Northern Hemisphere 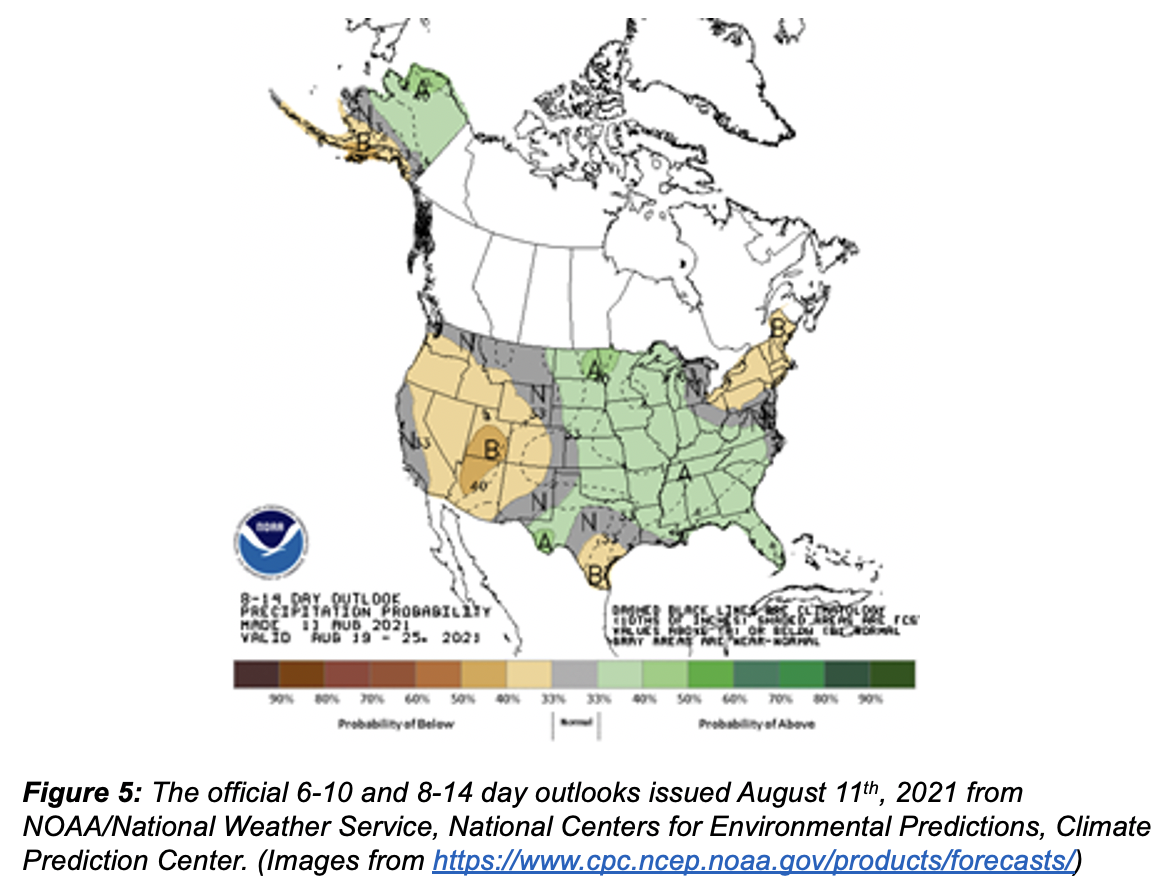 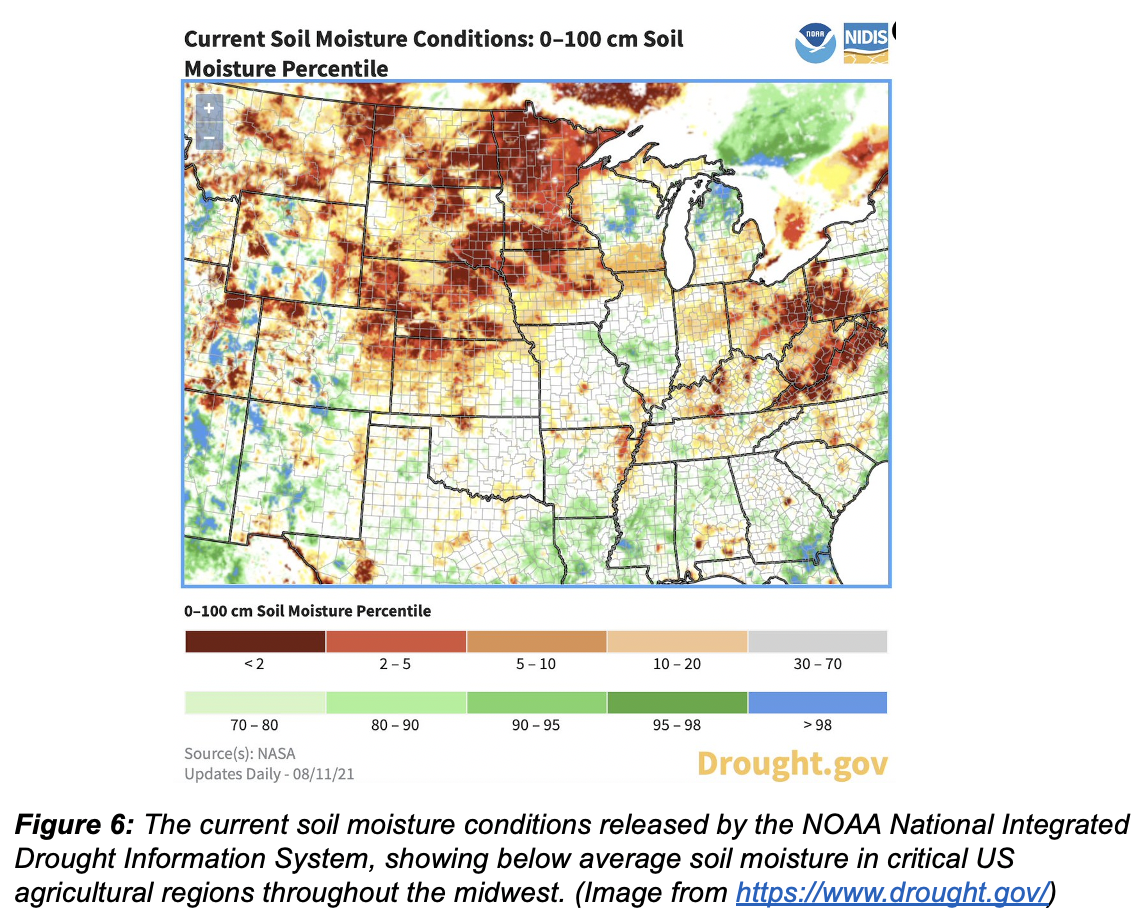 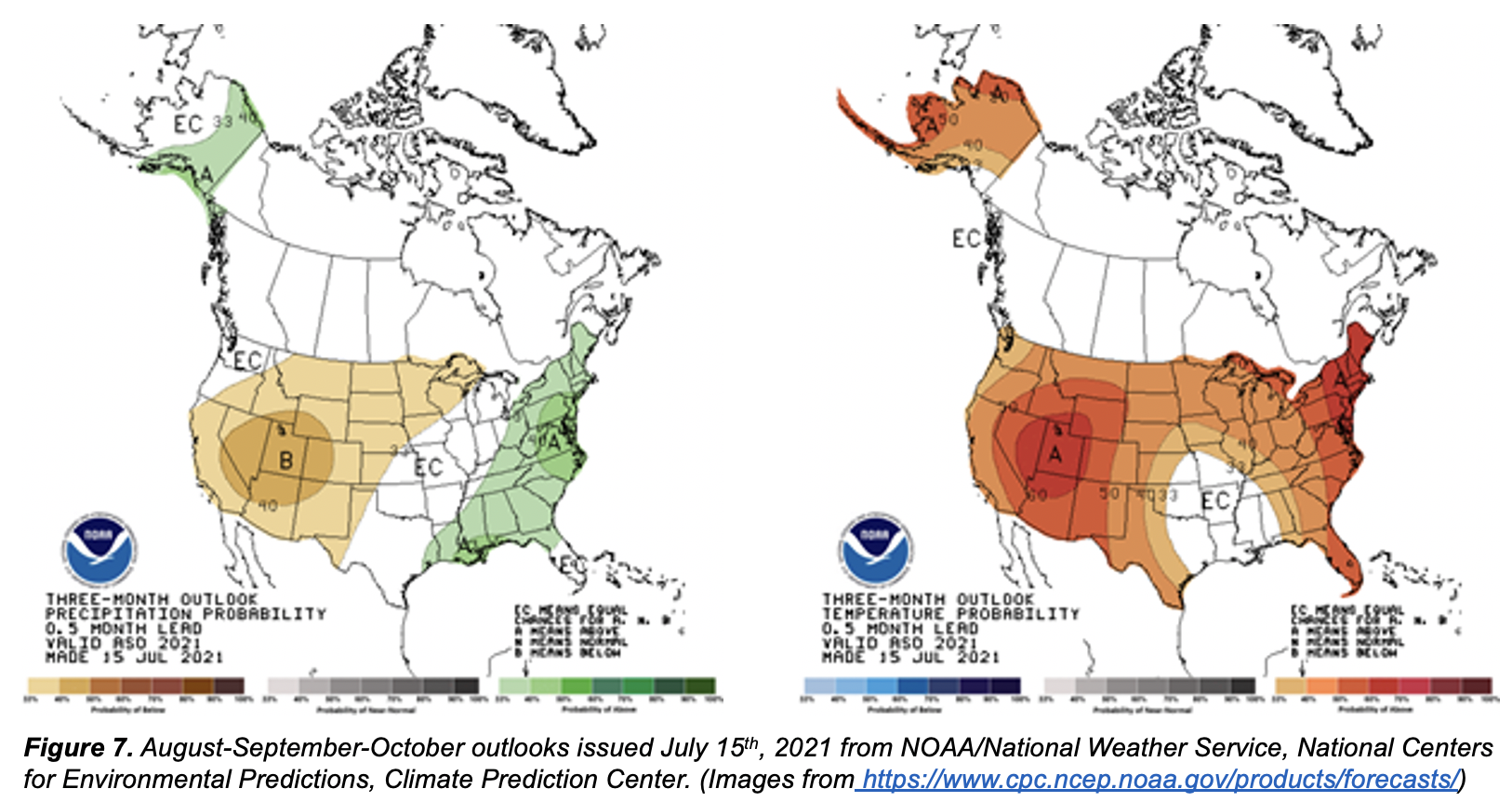 As the US is a major producing and exporting country of different agricultural commodities, it is critical that frequent and detailed agricultural monitoring and communication occur throughout the entire growing season in order to enhance market transparency. The better informed decision makers—including farmers, economists, governments, traders, and humanitarian organizations, among others—are, the earlier markets can adapt to the ongoing situation resulting in fewer episodes of extreme price volatility. From the NASA Harvest and GEOGLAM team, we will continue to monitor abnormal weather conditions for key countries such as the US in order to provide more transparent and timely information to policy makers, traders, and other actors in the supply chain.

More About the GEOGLAM Crop Monitors

In response to significant price volatility of main food commodities in 2008 as well as 2010 to 2011, the Group of 20 (G20) Agricultural Ministers established the Group on Earth Observations Global Agricultural Monitoring (GEOGLAM) and Agricultural Market Information System (AMIS) programs. The aim of these programs is to promote market transparency and reduce uncertainty to mitigate future episodes of extreme price volatility. To achieve this goal, the programs bring together stakeholders within the agricultural monitoring community to establish a consensus of current market conditions that can be used to coordinate timely policy action.

Within GEOGLAM and in partnership with the University of Maryland, the Crop Monitor initiative was developed to provide timely and science-driven information on global crop conditions. Each month, the GEOGLAM Crop Monitor publishes two bulletins to deliver consensus information regarding how global food crops are progressing in their growth cycles and the primary climatic drivers behind current crop conditions.  Both reports bring together information from global partner organizations, ground reports, Earth observation data, and meteorological information and forecasts to determine how crops are currently developing and what can be expected for the remainder of the season.

This information is compiled in each report using synthesis graphics, crop calendars, production pie charts, forecast information, and text descriptions that together provide a comprehensive overview of current crop conditions. The Crop Monitors have been a key component to agricultural monitoring during this uncertain period of drought in the US and worldwide. 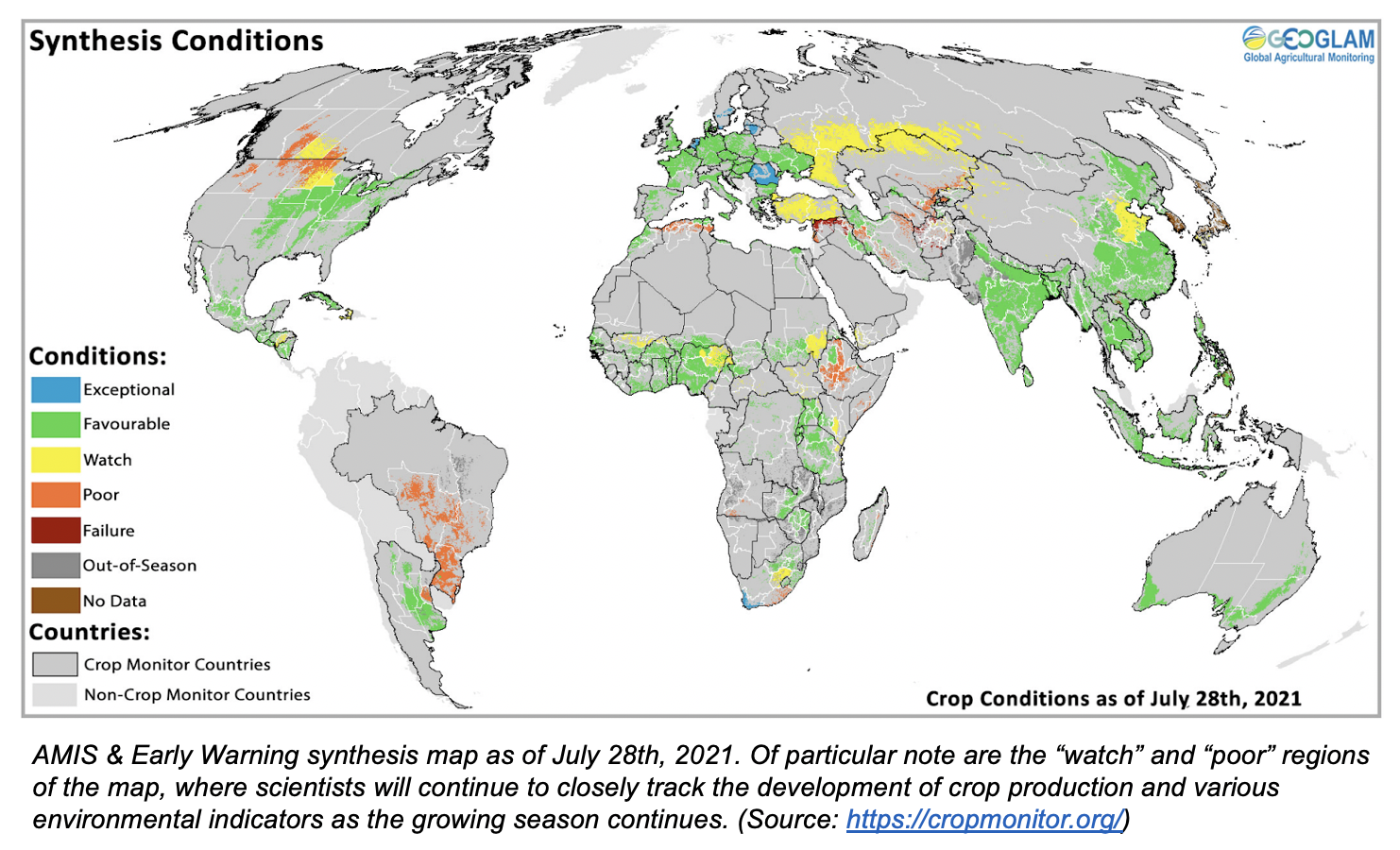 Compiling large satellite datasets into time series to monitor interannual and within-season changes in vegetation requires a lot of skill, computational power, and time; this is where NASA Harvest’s GLAM 2.0 comes into the picture. Now lightning-fast due to back-end developments that drastically reduce processing time, the new GLAM 2.0 system includes many new functions that help users visualize and understand the factors that are most important to their agricultural analyses.

Users can access the public web-interface from anywhere in the world as all processing takes place on “the cloud” and does not rely on local bandwidth to compile datasets. They can use the interface to pan around the globe to a region of interest, select an administrative boundary or draw a custom polygon to investigate, select from a variety of cropland and crop type masks to target relevant croplands, and then create custom time series charts with the ability to calculate mean and anomaly for datasets over time. Because cloud cover is a common issue in many agricultural regions and cultivation periods, users can also customize their cloud cover tolerance in plotting and displaying imagery as well. Users also have the ability to overplot crop calendar information on their time series plots, which provides important context to compare crop conditions between years.

The interface also includes multiple new datasets to help analysts glean insight into the drivers behind anomalous crop conditions throughout the world. Currently, the new GLAM system includes 8-day and 16-day NDVI datasets from NASA’s Moderate Resolution Imaging Spectroradiometer (MODIS), CHIRPS Precipitation datasets from the University of California Santa Barbara Climate Hazards Center, Soil Water Index from the Copernicus Global Land Service, and Temperature datasets from NASA’s MERRA-2 product, with more datasets on the way. All of this means that the GLAM 2.0 system provides a one-stop-shop solution for detailed and customized crop monitoring. This is particularly useful in providing science-based analytics during times of uncertainty and concern in the growing cycle.

*Visit https://cropmonitor.org/ for detailed information on the most up to date crop conditions in the U.S. and worldwide. The upcoming Crop Monitor Reports will be available on September 9, 2021.

*Visit https://glam.nasaharvest.org/ to explore the GLAM 2.0 system and conduct agricultural analysis via the user-friendly online interface. 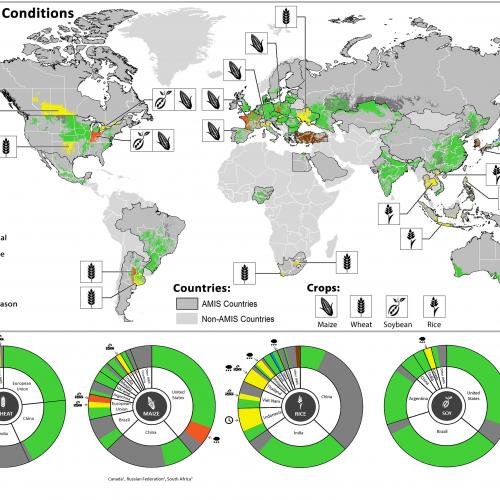 The GEOGLAM Crop Monitor for AMIS 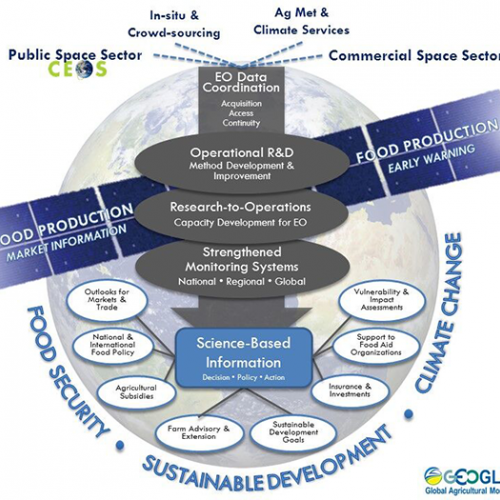