NASA Harvest’s Abdul Qadir has been awarded a NASA ROSES-2020 grant for his proposed research studying the impacts of climate change on agriculture in northern climates. The grant, Future Investigators in NASA Earth and Space Science and Technology (FINESST) funds graduate student-designed research projects. A graduate student at the University of Maryland at College Park under Harvest’s Dr. Sergii Skakun, Qadir plans on utilizing high spatial resolution radar and optical EO data to study how agriculture is impacted by climate change in Russia and Ukraine. 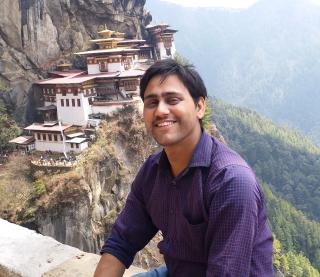 Russia and Ukraine are top agricultural producers, particularly when it comes to grains. Both countries are even expected to surpass Brazil and Argentina in terms of corn exports in the coming decade. It is not uncommon for many to believe that expected increases in global temperatures due to climate change will increase the agricultural yields at northern latitudes.

This notion, while perhaps a small light in the gloom that surrounds climate change predictions, is far from guaranteed. Sufficient temperatures are only a small part of successful farming. While the amount of arable land may increase, soil in northern Russia is thinner and more acidic than the more productive soil in the country’s breadbasket. Another critical aspect is plentiful precipitation and various studies have shown a high likelihood of increased drought in both Russia and Ukraine in the coming years.

Qadir expanded on this misconception stating, “There is a direct implication of the Russian and Ukrainian agriculture industry on the global food supply. While changing climate will benefit food production in higher/northern latitudes, the risk of global shortage of food supply is increasing with increasing extreme weather events. The 2010 global food shortage and the spike in food prices were the direct consequences of this extreme event.”

Qadir plans to study this interplay of increased temperatures and decreased precipitation to evaluate how the countries may fare in future harvests. While previous studies were often limited to country or regional scale due to the coarse imagery available at the time; Qadir will use high resolution EO data to allow for field-scale analysis and the identification of “climate change-induced agricultural hotspots” within each country.

Receiving the grant, Qadir expressed his eagerness to begin his research, saying “Being brought up in the family of farmers in the drought prone Bundelkhand region of India, I understand the risk which the failing crop harvest brings. NASA FINESST will provide an opportunity for me to support the food security issues and bring my previous agriculture knowledge and experience into action.”