This August, Hannah Kerner, NASA Harvest’s AI and US Domestic Lead, got the opportunity to participate in the 2021 Pro Farmer US Crop Tour. Spanning the US Midwest, the Tour investigates local crop conditions and produces prospective crop yield estimates. Kerner participated in the Eastern route of the Tour which looked at corn and soybean fields in Ohio, Indiana, Illinois, Iowa, and Minnesota. Travelling with people from a variety of backgrounds, Kerner got to share the work that Harvest does while simultaneously learning about the work of others in the agricultural sector, including farmers, journalists, agronomists, traders, and more.

Beginning in 1992, the ProFarmer US Crop Tour has provided prospective crop yield estimates to both farmers and agricultural commodity markets. This analysis allows both to better understand crop conditions and plan for their post-harvest selling strategy. Taking place soon after the USDA's August WASDE report is released, the Tour occurs at a crucial growing time and helps to further inform the agricultural community on crop conditions as harvest approaches. The Tour includes a Western leg, which starts in South Dakota and crosses through eastern Nebraska and western Iowa before joining up with the Eastern leg in southern Minnesota. Each evening the ProFarmer team gathers the scouts’ data and summarizes them in a public forum. 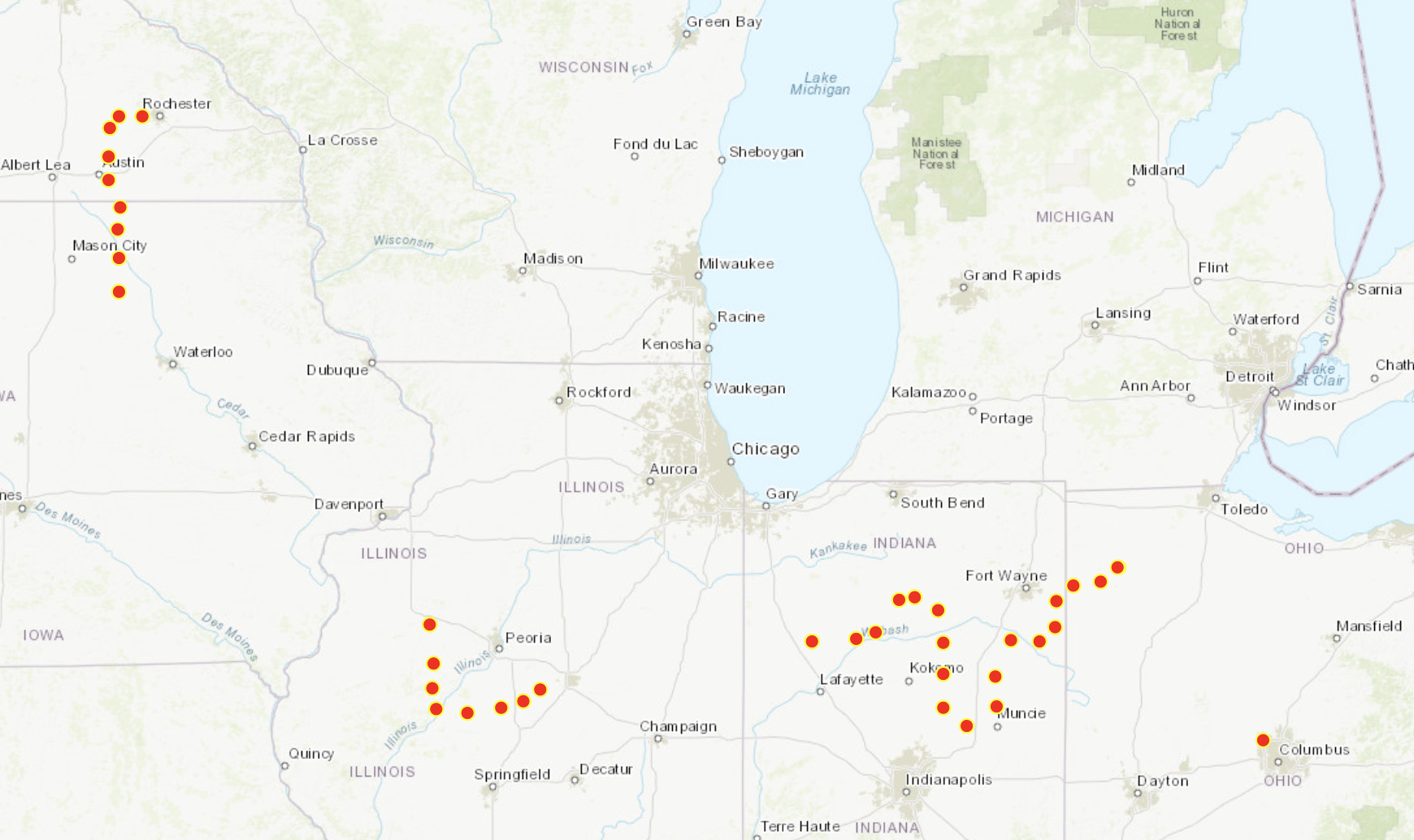 Fields where Hannah Kerner stopped along her Tour route.

The tour has predefined routes that participants, called “Scouts”, drive along each year. Scouts travel in small groups of 2-3 along an assigned route, stopping every 10-15 miles at a randomly selected location with easy access to corn and soybean fields. To do their estimates, each team estimates the average number of corn kernels per ear by multiplying the number of rows and kernels per row. They then estimate the number of ears per acre by systematically selecting ears along a row based on the distance between each planted stalk. Multiplying the estimated number of ears by the estimated kernel counts gives a total estimated kernels per acre, which is then converted to a more common unit of bushels per acre. 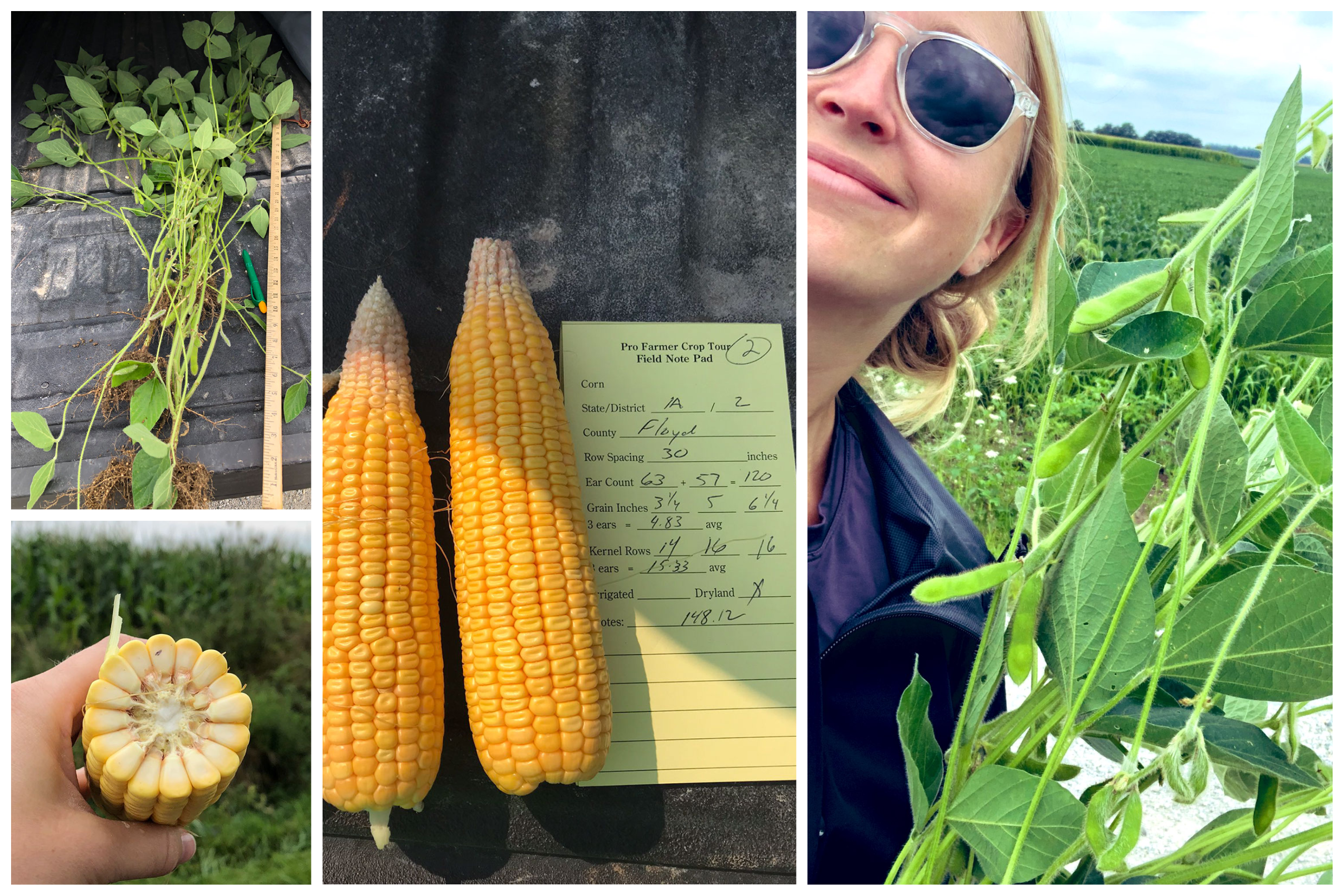 The ProFarmer Crop Tour plays an important role in bringing scouts of different backgrounds together. Scientists, extension agents, farmers, insurance and commodity agents get to meet each other and be exposed to their unique perspectives across the agricultural industry. Many scouts live near or along the routes, so fellow participants from non-farm backgrounds get the opportunity to meet local farmers and learn more about their operations.

Last stop of #pftour21 had some family visitors to see how the process works. Central Delaware County, average yield 215.6 ? pic.twitter.com/ujVv0YMYdC

Crop Conditions Across the US Midwest

During the 2021 Tour, groups saw a mix of crop conditions. Corn crops had generally high kernel counts, translating to high prospective corn yields. Soybeans, however, were much more variable. Scouts particularly noted a difference in the dryness of fields on the eastern and western sides of the Mississippi, with soil moisture being significantly lower on the western side. These findings correlate with what satellite data had shown us throughout the growing season. 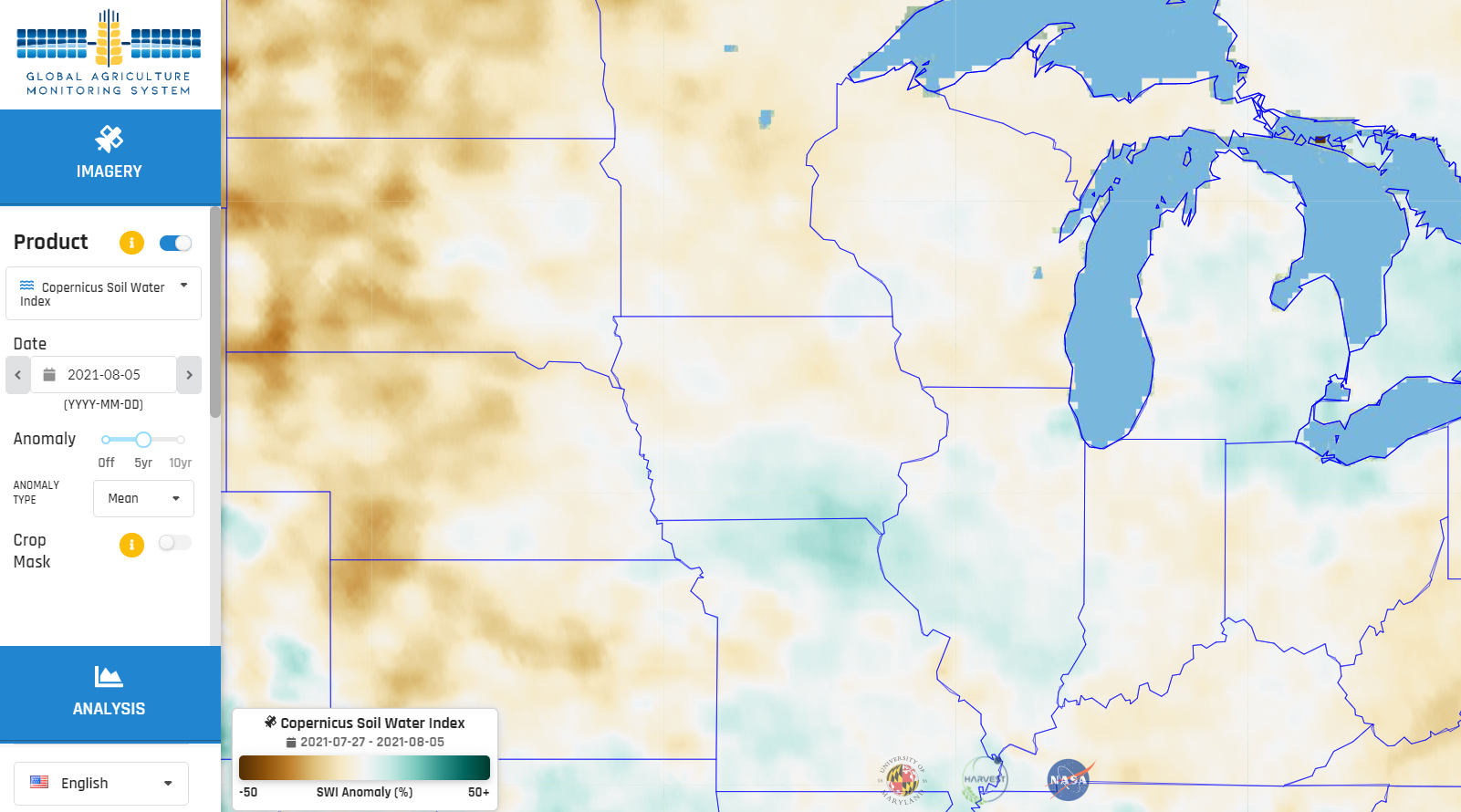 This gif displaying maps from the US Drought Monitor shows how drought conditions have worsened in the western US Midwest in early-August 2021 compared to early-August 2020.

Kerner noted that despite the dry conditions, yields were generally favorable overall. She recounted that many scouts believed that the soybeans yields could be improved with favorable weather conditions. These observations were borne out by a recent report by the USDA’s National Agricultural Statistics Service, which estimated that corn and soy production had increased by 3% and 5% respectively over the 2020 yields.

Over its almost 30 year history, the ProFarmer Crop Tour has become a valuable source of early crop yield estimates, while also helping to make interpersonal connections throughout the agricultural sector. You can learn more about the 2021 Tour here!

It’s a whole different experience looking at corn from inside the field instead of a satellite image. As a computer scientist it’s great to work on projects where I get outside in the field… even if it means getting whacked in the face with corn leaves ???‍???‍? #PFtour21 #agtech pic.twitter.com/o1AWVBPiMj