The Legacy GLAM System Gets an Update

Compiling large satellite datasets into deep time series to monitor interannual and within-season changes in vegetation requires a lot of skill, computational power, and time. In the early aughts, UMD together with NASA and USDA developed the first web-based platform to enable near-real-time monitoring of global croplands using NASA MODIS data, enabling operational users across the globe to track crop conditions as seasons unfolded (re. https://www.mdpi.com/2072-4292/2/6/1589). After years of operational use and a lot of valuable feedback from partners including Conab and INTA-Argentina, it was time to redesign this system - known as Global Agricultural Monitoring or GLAM - to be faster and more flexible, and to capitalize new datasets coming online and new computing architectures available. Thanks to funding from NASA ESDS and NASA Applied Sciences, the NASA Harvest team has accomplished just that.

Now lightning-fast due to back-end developments that drastically reduce processing time, the new GLAM system includes many new functions. Users can access the publicly-available web-interface from anywhere in the world, as all processing takes place on “the cloud” and does not rely on local bandwidth to compile datasets. They can use the interface to pan around the globe to a region of interest. They can select an administrative boundary or draw a custom polygon to investigate. They can select from a variety of cropland and crop type masks to target relevant croplands, and then create custom time series charts with the ability to calculate mean and anomaly for datasets over time. Because cloud cover is a common issue in many agricultural regions and cultivation periods, users can customize their cloud cover tolerance in plotting and displaying imagery as well. Furthermore, users also have the ability to overplot crop calendar information on their time series plots, which provides important context to compare crop conditions between years.

As with the original GLAM System, in addition to the global interface there are also national implementations planned and already operational. First up is the Conab Brasil customized GLAM interface, which was developed and tested hand-in-hand with our counterparts at Conab. Conab is a public company, operationally mandated by the Ministry of Agriculture, Livestock and Food Supply to produce area, yield and production estimates regarding several major commodity crops to the Brazilian government. While users can still view and implement all of the same types of datasets offered in the global system, the Brasil GLAM website offers additional features. While the global site does include regional statistics at the subnational level, the Brazilian site goes beyond the subnational level. In response to Brazilian administrative regional needs, this application includes extra Brazil-specific crop masks as well as extra levels of analysis.

In addition to the system’s current capabilities, planned features include the ability to upload custom geometry (e.g. shp, kml, geojson) to retrieve dataset statistics and visualization of dataset anomaly in order to provide users with an indication of the relative performance of a crop over time. The team is also preparing to integrate moderate resolution data sets, for example Landsat, Sentinel, and the Hybrid Landsat-Sentinel products, to move us into this new era of continuous land monitoring at 30m or finer resolution.

Additionally, the serverless architecture enables us to quickly spin up and launch new GLAM systems for other regions and users. Are you interested in your own GLAM system? Contact project PI Alyssa Whitcraft.

How We Accomplished It

By using Amazon Web Services (AWS) and “serverless” architecture, the NASA Harvest team has been able to create both a web application and application programming interface (API) that provides on-the-fly data projection, masking, color table application, image differencing, and statistics calculation. As a result, it is not necessary to pre-generate all permutations of the NDVI datasets that would previously have been generated in on-premises architecture. Likewise, it is also not necessary to reproject the global NDVI datasets with the new GLAM system. The on-the-fly capabilities reduce the storage demand to the volume of only the NDVI files (i.e. less than ten terabytes) as opposed to the hundreds of terabytes required by the previous on-premises architecture version. In addition, because these functions are done on the spot, the collection of datasets, crop masks, and color ramps can be arbitrary. Therefore, the system does not need to be limited to NDVI and can be expanded to include precipitation, soil moisture, or any other raster dataset.

*The updated GLAM system has been widely used to flag potential crop impacts especially in Argentina, as featured by the country's largest media outlet La Nacion. 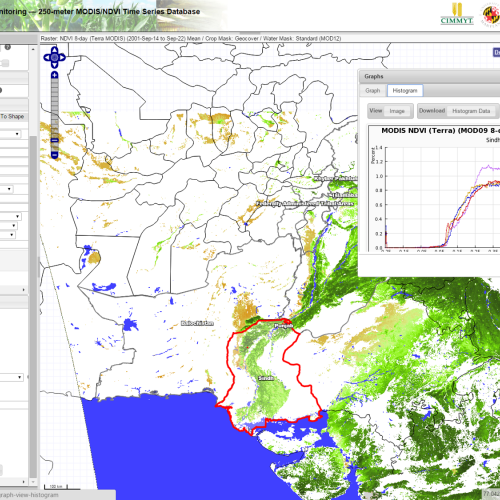