Current drought across the Western United States has caused no shortage of alarm as intense heat waves and low to non-existent precipitation has led to an incredibly dry landscape. While raising the risk for wildfire, this drought has also caused incredibly low moisture content in the region’s soils—a situation that could lead to severe adverse impacts on local agriculture. A research team including NASA Harvest’s Dr. Mehdi Hosseini recently set out to develop new methods for detecting changes in soil moisture levels over short time periods. Using data collected from a field campaign covering just under 4,400 km2, the team tested the capabilities of both satellite and unmanned aerial vehicle (UAV) based sensors. Their results show the effectiveness of both collection platforms as well as potential avenues for improvement.

The Western United States is entering an abnormally hot and dry summer after experiencing their second driest spring since 1895. The impact this has had on the region’s soil moisture levels cannot be overstated. This map of topsoil moisture measures across the US show almost every state west of the Rockies to have more than 50% of its topsoil rated as “short” or “very short”, both terms referring to moisture levels where vegetation growth would be curtailed or halted. 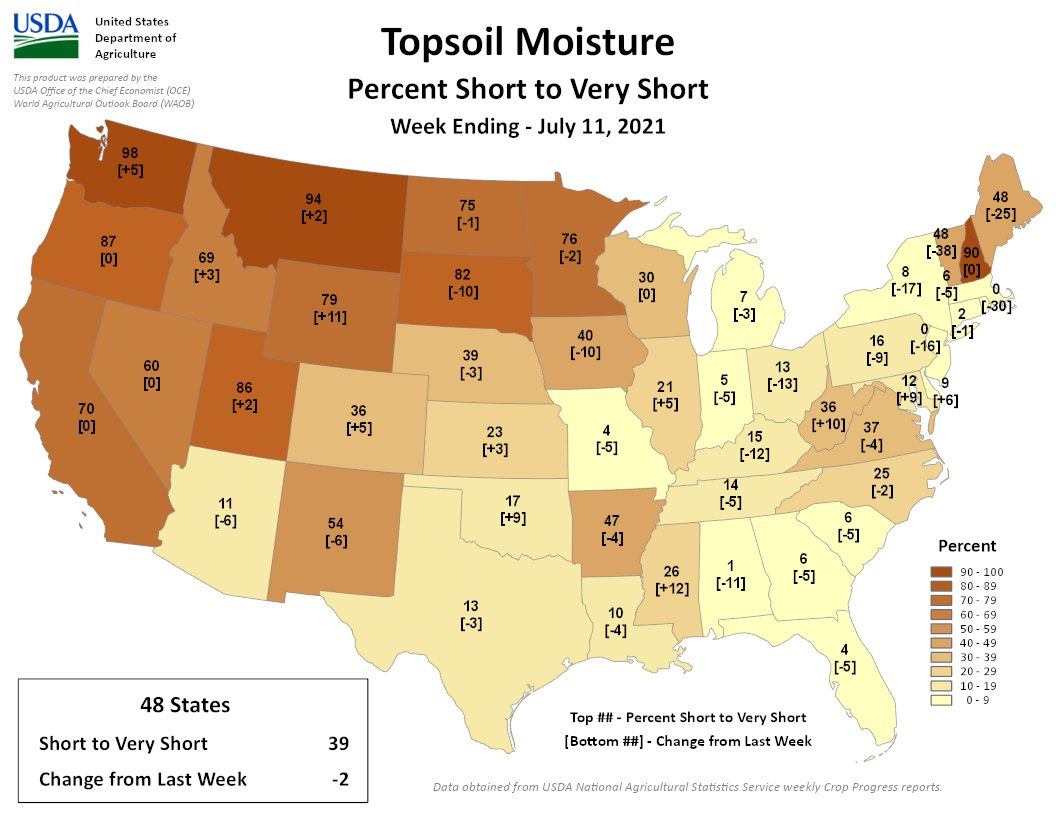 A map from the USDA showing the percentage of topsoil rated as “Short” or “Very Short”.

The soil moisture levels in Washington State for instance are at their lowest point of the 21st century. These critically dry soils are projected to have severe impacts on agricultural production in the state. 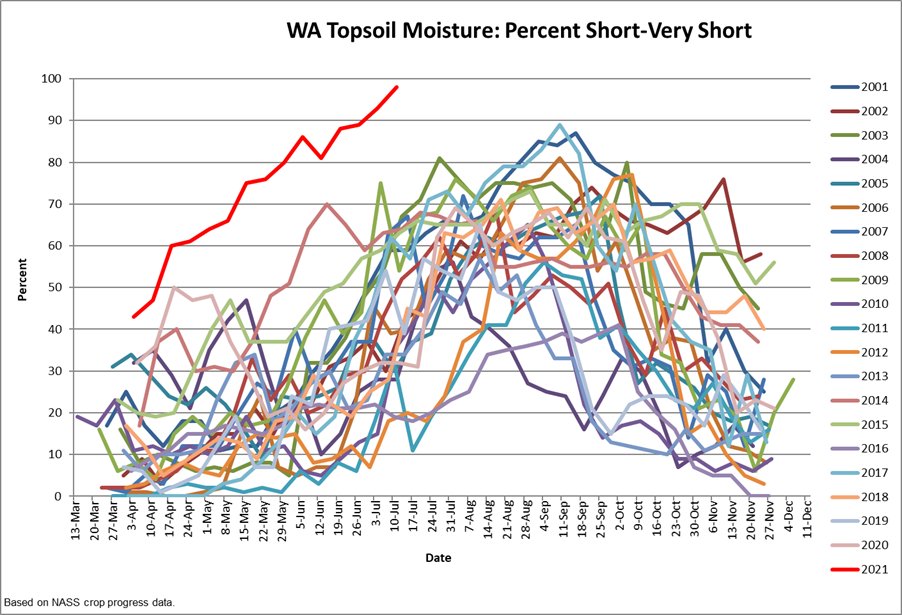 The percentage of topsoil in Washington State found to be “Short” or “Very Short” is shown to be significantly higher than previous years.

The risk to agriculture showcases the necessity of being able to track how soil moisture is changing over time and space. Dr. Hosseini’s co-authors, Dr. Sadegh Ranjbar [University of Tehran], Dr. Mehdi Akhoondzadeh [University of Tehran], Dr. Brian Brisco [The Canada Center for Mapping and Earth Observation], and Dr. Meisam Amani [Wood Environment & Infrastructure Solutions] sought to test the capability of radar EO data to measure this change. Given radar’s capability to peer through extensive cloud cover (both normal and wildfire-generated), it is an ideal tool to extend measurement capabilities.

Specifically the team used a variety of radar called interferometric synthetic aperture radar (InSAR). SAR is a technique where transmitted radar waves are bounced off a target surface and imagery is produced based on the power of the wave received to the sensor and by measuring the time it takes for the waves to return to the satellite sensors. Interferometric SAR compares two SAR measurements at different time periods and calculates the difference between them, creating a map showing the changes in the ground surface. While commonly used to explore ground subsidence, volcano formation, and permafrost meltage, it has recently been shown effective in estimating soil moisture as moisture levels can impact the characteristics of a surface. While a relationship between soil moisture and “interferometric phase” has been known to exist since 1989, the recently published study tests if changes in interferometric phase can also be used to estimate changes in soil moisture.

InSAR data was collected from both space-borne sensors (ESA’s Sentinel-1) as well as sensors attached to UAVs. In-situ coincident soil moisture measurements were collected during field campaigns in Canada. Soil moisture data was gathered from a variety of fields, including corn, soy, wheat, canola, weed, and bare land. 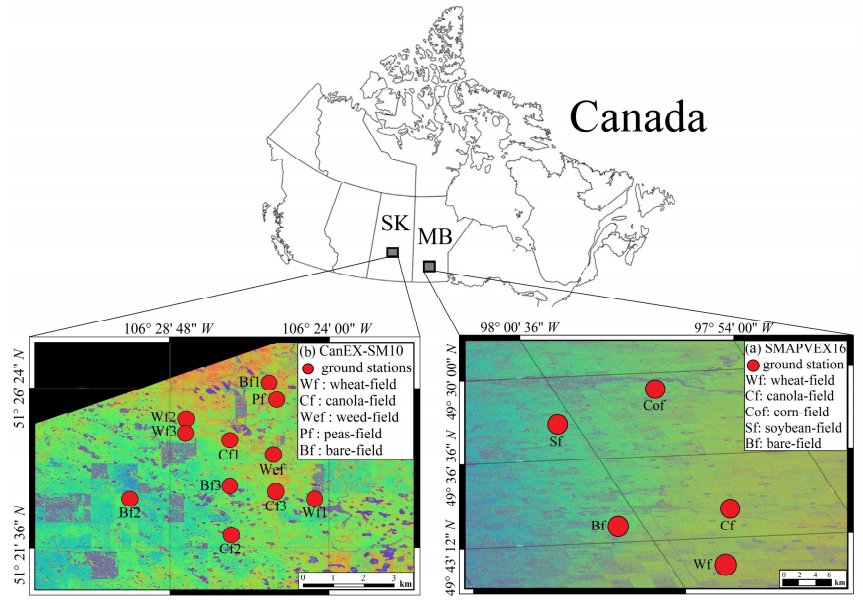 This figure from the team’s recently published paper shows the location of fields where data was collected in central Canada.

The team’s regression model found that interferometric phase, or the changes in InSAR values, can be used to estimate a field’s soil moisture. However, they found that heavily vegetated fields interfered with this capability and lowered the estimation accuracy.

Particularly affected was the space-borne Sentinel-1 sensor which struggled to achieve accurate measurements behind dense vegetation. InSAR data collected from the UAV however was able to “look past” this obstruction and get a more accurate measurement. The team notes that Sentinel-1 would be most useful in the early growing season, before extensive vegetation appears.

Additionally, results showed that the vegetation confounding was exacerbated by a low temporal collection timeline. In other words: as crops grow, it is vital to have more frequent measurements for accuracy. Going forward, these findings provide new evidence of the potential for InSAR to be used for soil moisture estimation and will help with the design of new soil moisture monitoring systems.

A full breakdown of the team’s methods and results can be found here.