NASA Harvest, NASA’s Food Security and Agriculture Program, is a global consortium with contributions from people of many different backgrounds, specialties, and interests. What unites us all is a dedication to bolstering food security around the world through Earth observation applications, and a shared passion for technology that improves lives. We are proud of the work that we do and the people who produce it. This feature introduces the people of NASA Harvest, showcasing the members of our organization and how their efforts support a food-secure future. 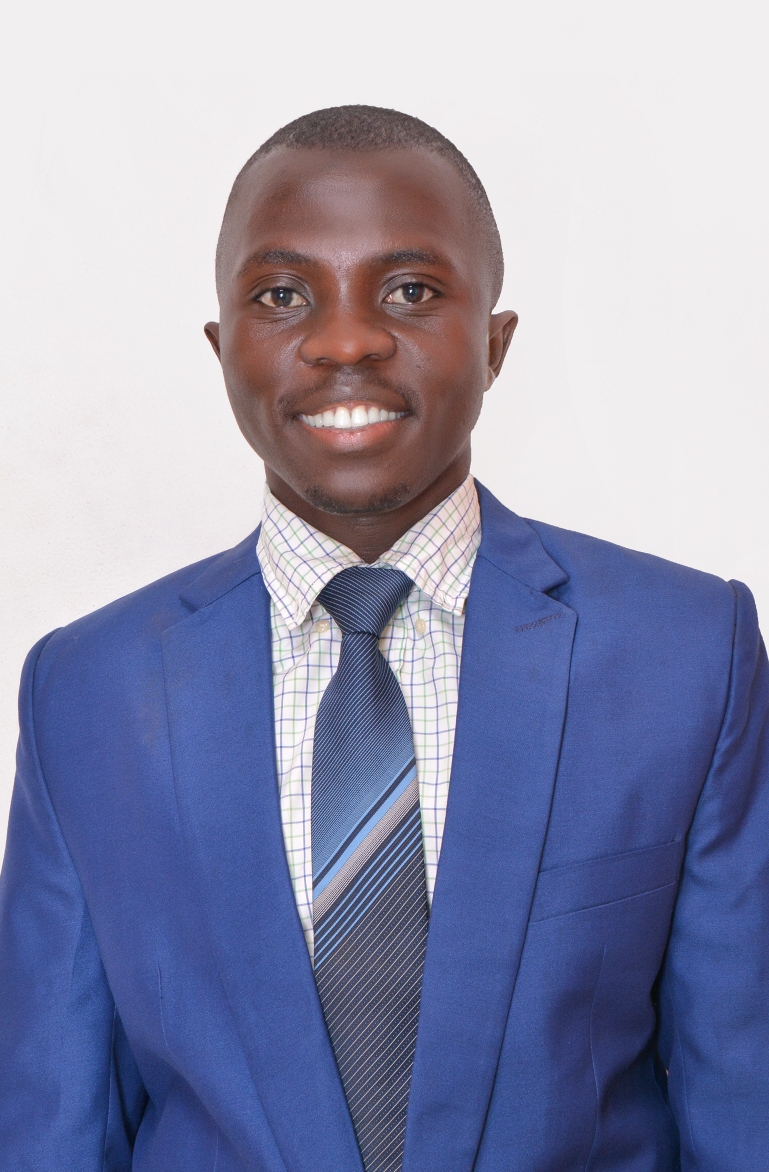 Edrick Bwambale is a field extension officer at the Mubuku irrigation scheme in Kasese district, Uganda as well as the Lead Agronomist at Sustainable Agri-Food Initiative Limited. His  work revolves around transferring technical knowledge to farmers to improve their production and productivity. He conducts on-farm extension services, advising farmers on variety selection, crop management, pest and disease identification and control. When the crops have matured, he oversees harvesting activities from 516 hectares of cropland and supervises post-harvest processing activities to ensure quality control.

In addition to his outreach and monitoring efforts, Edrick is also a farmer, specializing in growing tomatoes and rice.

How did you get involved with the NASA Harvest Africa program?

I first heard about NASA Harvest’s Africa Program when the winners of the Africa Food Prize 2020 were announced. The Lead of NASA Harvest’s Africa program, Dr. Catherine Nakalembe, was named a 2020 Africa Food Prize Laureate for her work using EO data to combat food security across the continent of Africa. Her work really stood out to me as an example of how we can strengthen agriculture in Africa. I reached out to her and was able to meet her about 9 months later here in Uganda. After our meeting, I applied, and was hired, for a data collection position that had opened for a project she was leading called Helmets Labeling Crops.

Can you elaborate on what Helmets Labeling Crops is? 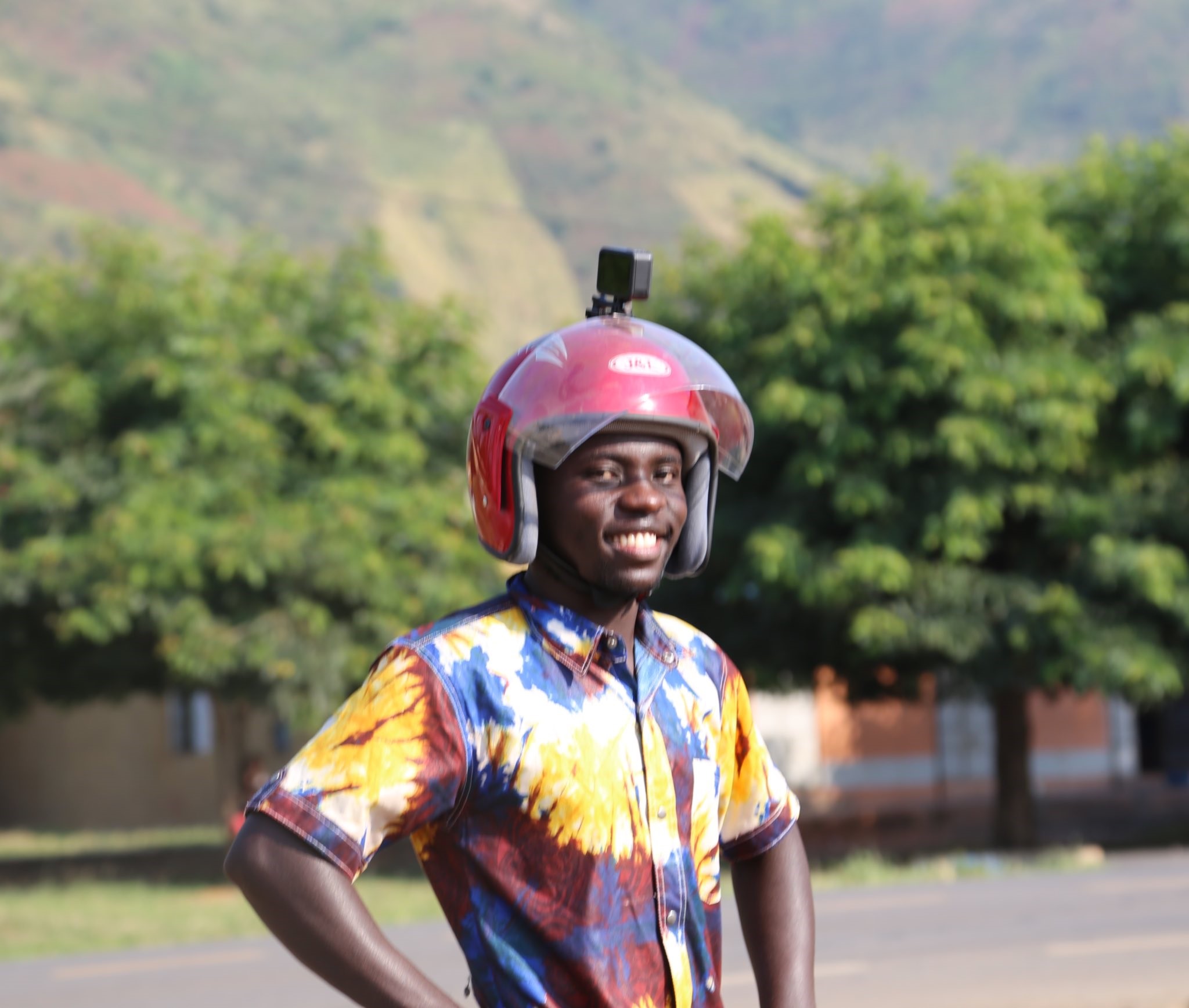 The Helmets Labeling Crops project will, in the end, produce novel Machine-Learning-ready labeled datasets for crop type, crop pests and disease, and market prices in five African countries. Government agencies, national research institutions and multinational organizations will be able to access this data and use it for informed planning, research and farmer training. The research that comes from this data will help guide decision making and agricultural risk management.

The project has data collectors, referred to as Helmets for the camera mounted to their motorcycle helmets, that travel throughout agricultural areas in the project countries. The helmets record data on the crops grown along the route of the Helmets and algorithms later parse the data, classifying cropland and non-cropland. I am a Helmet who operates in a few different districts in south western Uganda.

How important is farming to the economy of Uganda?

Farming forms the backbone of Uganda’s economy. It contributes a quarter of the country’s GDP. It is estimated that the sector employs up to 72% of the population and contributes 53% of Uganda’s export earnings1. Since most industries are agro-based, the agriculture sector leads industrial activity in Uganda. Regardless of its critical role however, Uganda’s agriculture sector still performs below its potential. This is why farming in Uganda deserves a second look.

Ideally, farmers should have access to data like soil analysis and management knowledge, market information, and weather or climate reports. Unfortunately, many farmers do not have access to this information and would struggle to integrate it into their farming practices. The lack of technical knowledge, not just among farmers, but along the value chain, hampers the deployment of more modern farming techniques. The small percentage of farmers who do have have access have only have limited access, especially about markets of their produce and their soils and how to improve them.

One thing that I think would help area farmers is if they get organized in farming groups and cooperatives. The collective action can make it easier to receive, disseminate, and act upon data that would make vital changes for their operations, including increasing yields and combating food insecurity.

Access to irrigation has often been a limiting factor for Ugandan agriculture. The government has implemented various engineering systems to help improve irrigation in vital farming areas. One of these systems is known as the Mubuku Irrigation Scheme in Kasese district in southwestern Uganda. Can you speak to the need for and the importance of irrigation in Uganda? And can you please talk a little about how this Irrigation Scheme has helped improve agriculture in the surrounding area?

Irrigation is a limiting factor in Uganda’s agriculture since most crop and livestock farming is rain-fed making it highly susceptible to weather fluctuations. The frequency of droughts and floods in Uganda is increasing and resulting in crop failure and loss of livestock. In times when the dry spell is prolonged, most farmers who rely solely on rain-fed farming lose their crops while those who have access to irrigation get better yields. Just like Early-warning systems, ground and satellite based systems, irrigation is important in Ugandan agriculture.

Looking at farmland within the Mubuku irrigation scheme, crop farming is more profitable, intensive and intentional when compared to cropland outside of the scheme. The farmers grow mainly maize and rice for seed multiplication and food consumption respectively under furrow irrigation. They receive training on when to irrigate and how to use irrigation water effectively.

Additionally, the farmers within the scheme belong to a registered cooperative society. This membership has made it easier for them to produce with decreased risk of crop loss due to droughts. It always allows the member farmers to more easily obtain market information and negotiate for better prices. These combined factors have put the land within the Mubuku irrigation scheme among the top food producing areas in Uganda.

Despite the improvement in irrigation and the associated crop yields, what are some other things that farmers in Kasese district could do to improve their farming and personal financial security?

One issue that I run into as an extension officer is persuading local farmers to take up new management practices. More traditional practices can be hard to break away from and many farmers can be hesitant to adopt new techniques.

Secondly, our farmers need to develop a useful habit of keeping farm records of what and how much they are spending on during production as well as reinvesting their proceeds back into the agricultural value chain. This will help them see year to year trends, but more importantly help them make more informed financial decisions.

What are some of the ways that the government and local Field Extension officers are helping to inform the local population about best management practices?

The government of Uganda is strategically improving service delivery through strengthening the institutional capacity of the Ministry of Agriculture, Animal, Industry, and Fisheries and its agencies.

During my Helmet data collection, I worked closely with Mr. Murungi Moses, a local Field Extension Officer. He told me that one of the most effective ways that he has found to reach out to the farming households in the district is through a local radio program that airs twice a week. He encourages farmers to get organized in groups – groups from which they will adopt better farming practices, farming innovations and better markets for their produce.

Like other local field extension officers, Mr. Murungi also sets up and manages demonstration gardens from where he trains farmers about best management practices in addition to individual field visits to farms. 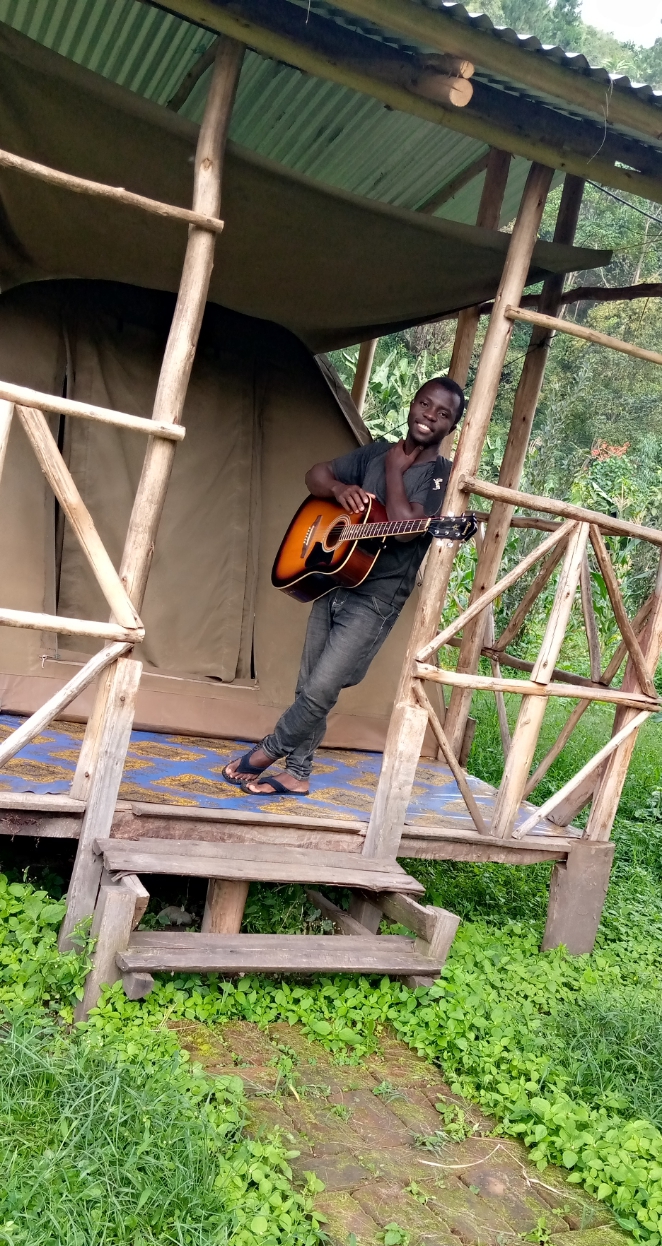 What did your time on the ground, collecting data, teach you about agricultural conditions in SW Uganda? What message do you want people to know about the capability of agriculture and local farmers in SW Uganda?

During my travels collecting data for the Helmets Labeling Crops project, I saw just how low crop yields are compared to what they could be if their potential was more fully met. Growing up, my family only had one meal a day and many other families are still in similar circumstances. Food insecurity is a big threat in Uganda and we have to have to be creative in overcoming it. I think that Uganda’s successful irrigation and agricultural cooperatives provide good examples of how we can expand our country’s agricultural productivity. I also am happy to be working with Dr. Nakalembe and NASA Harvest as I think that the data we’re collecting will be very useful in helping inform future agricultural planning and management.