As noted in an ABC news interview last week with the U.S. Secretary of Agriculture Tom Vilsack, Ukraine is a major exporter of grains to the world, and especially main commodity crops such as wheat and maize. Its wheat exports are estimated to account for 12% of the world's total, and the country exported about 16% of the world's corn in 2021. Furthermore, “last year the state harvested nearly 33 million metric tons of wheat, the USDA reported, a stark increase from the previous year.” As such a critical player in the global food market, disruptions to the Ukrainian supply chain have far-reaching implications well beyond its borders.

In response to the Russian incursion of Ukraine that began on February 24, 2022, the NASA Harvest consortium is investigating: 1) the dimension of the threat to the globe’s wheat and maize supply chain, due to a disruption of Ukraine’s grain exports; 2) food insecure countries who might feel these impacts more than others; 3) the knock-on impacts on food security that could occur if grain exports do not move for many months. As regions of conflict may become difficult to reach and food availability more complicated to evaluate, remotely sensed satellite data can help to fill data gaps and better paint the overall picture of potential food supply chain issues.

We are already beginning to see new policies implemented affecting shipping and trade, an already vulnerable piece of the supply chain which has been suffering under pandemic-related stress. For example, yesterday’s Reuters report notes that according to an adviser to the Ukrainian president’s chief of staff, “Ukraine’s military has suspended commercial shipping at its ports after Russian forces invaded the country…stoking fear of supply disruption from the leading grain and oilseeds exporters.”

Gary Eilerts, NASA Harvest Food Security Early Warning Co-Lead and food security specialist, has begun conducting initial evaluations of the potential magnitude of agrifood system impacts. Since 2019, Ukraine has become one of the globe’s top three exporters of grains and as of mid-February 2022, Ministry of Agriculture figures noted maize exports of over 17 million metric tons (MT). This leads analysts to speculate that final numbers for the ongoing grains season (July 2021 - June 2022) might have approached 27 million MT of exports. This estimate was, of course, made prior to Russia’s presence in Ukraine.

It is worth noting that in terms of what has occurred over the last 6 years, the bulk of Ukraine’s upcoming wheat exports would normally occur in the latter part of 2022. Maize exports, on the other hand, normally occur in the first part of the calendar year. This means that current port closures will greatly and immediately affect a large portion of the crop designated for export – maize, at this particular time of year.

Who normally imports Ukrainian wheat and corn, and are there food security implications?

The map below shows the 15 largest importers of Ukraine’s wheat and maize over the last 6 years (2016-21) - note that none are located in North, South or Central America, or the Caribbean. In fact, some of the main importing regions are those already prone to food insecurity which means that the conflict in Ukraine may greatly impact already vulnerable food supplies. 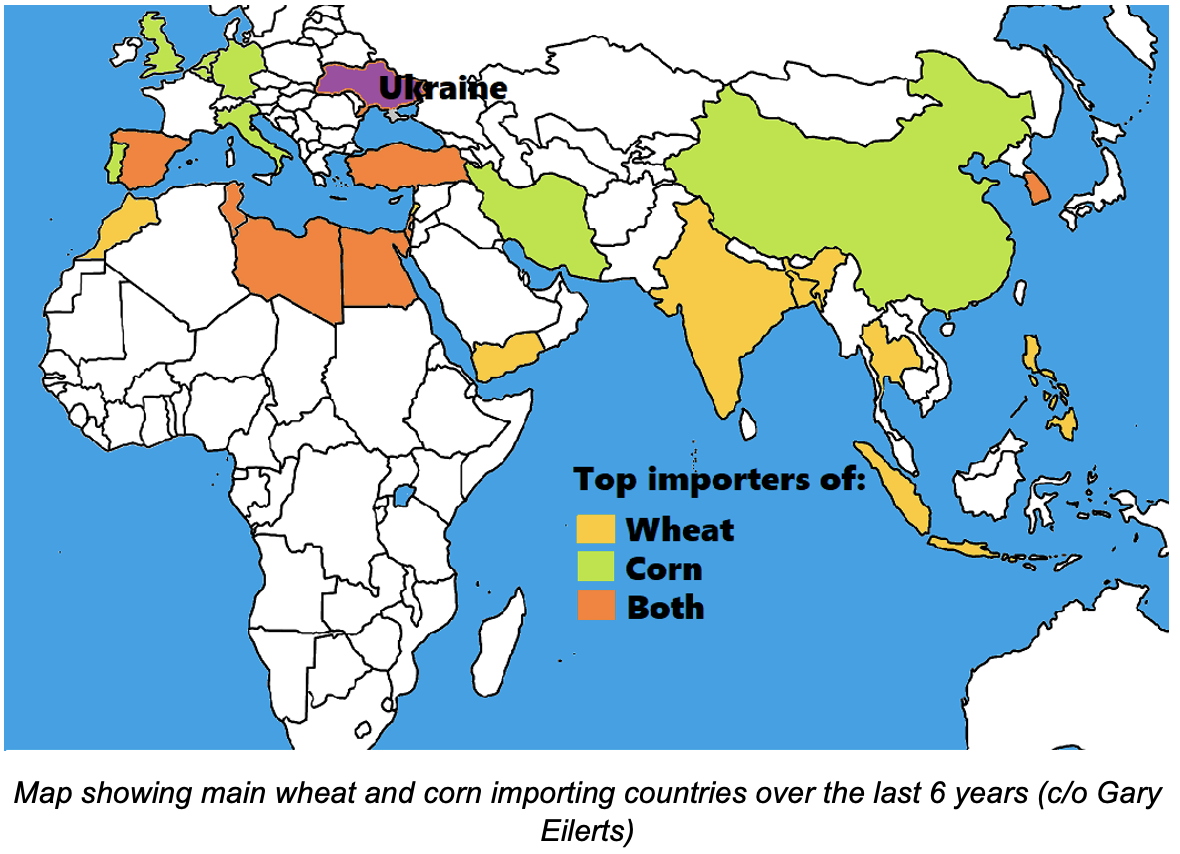 Yemen is the most food insecure country that shows up on the top importers map, at 15th largest importer of Ukrainian wheat (>2.5 million MT between 2016-21, and more than 550,000 MT in calendar year 2021). Kenya, Mauritania, Ethiopia, and Nigeria – other countries known to be prone to food insecurity – are also in the top 25 importers of Ukrainian wheat.

What are the potential food security impacts?

Keeping in mind that many importers of Ukrainian wheat and corn are known to experience food insecurity, it is important to understand how this supply chain disruption may further impact access to food in these regions. For example, Yemen’s imports of Ukrainian wheat represent about 16% of its total wheat imports over the last six-year period, a gap which would have to be made up elsewhere if access to Ukrainian crops becomes unavailable. A more notable reliance on Ukrainian wheat imports is seen in the case of Mauritania, where 51% of its total was delivered by Ukraine (Ethiopia = 22%, Kenya = 13%, Nigeria = 3%). It is no small feat to rearrange supply chains, meaning that it is not an easy process for a country to simply start importing from elsewhere. This is due to the fact that conflicts causing import/export restrictions result in decreased supply and an increase in demand, so significant losses of imports such as these will impact global economics. In some of these food insecure countries, and many others in the rest of the world, grain supply stability will likely become more difficult to assure in coming months.

As a variety of commodity news items report in the last few days, the price of wheat has bumped up noticeably as the reality of Russian/Ukrainian conflict has materialized in an already tight market, and as ports begin closing. Because Russia is also a major exporter of wheat and maize, the price increases reflect a disruption of both country’s exports and rising “risk-related” shipping costs for any grain that is exported via the important Black Sea ports in each country. If Russian oil and gas exports are also affected by the conflict, then the trickle-down effects of more expensive energy supplies will add substantially to a broad range of costs that will be felt in most food insecure countries.

NASA Harvest partners will continue to evaluate and respond to this fluid situation to produce the most up to date information. Our goal is to ensure that food supply chain information and potential disruptions are readily available to aid in decision support.