A country's  agricultural success is vital in providing food security, but also for maintaining economic strength as the agricultural sector is a significant portion of many countries' economies. As such, there is always an effort being made to better understand and improve agricultural productivity. Many of these efforts are focused on the climate of agricultural zones as climate is the most overwhelming factor determining crop success. One example of such a climatic factor is the El Niño–Southern Oscillation (ENSO). ENSO affects the sea temperature in the tropical Pacific Ocean and thus has global implications on temperature and precipitation. ENSO is broken down into 3 phases:

ENSO impacts are especially important in Africa where agriculture is the main economic sector for many countries, particularly in Southern and Eastern Africa. The fluctuating SSTs warm and cool the atmosphere, creating convection cycles that differ in terms of temperature and precipitation across the countries in both regions. Meaning that the same El Nino event, for examples, can cause both drought and flooding in different countries. Additionally, ENSO’s impact is not equal across the continent. Southern Africa, for instance, tends to see decreased crop yields during El Nino, while Eastern Africa tends to see increased crop yields during this same period. Given that these increases (+17% maize yields in Kenya) and decreases (-20-50% maize yields in Southern Africa) are so extreme, it is vital to explore the extent to which ENSO is associated with agricultural productivity and how we can use this knowledge to predict future agricultural success.

A recent paper published in Frontiers in Sustainable Food Systems Nazmus Sazib [NASA GSFC/SAIC], Iliana Mladenova [USDA], and Harvest Partner John Bolten [NASA] tackled this question using a variety of earth observation data and statistical analysis. The goals of the study were to (1) explore the association between ENSO, vegetation condition, and soil moisture and (2) analyze the difference in soil moisture and vegetation conditions between the two extremes of ENSO (El Nino and La Nina). The team studied ENSO's effects over Eastern and Southern Africa using a variety of data including soil moisture, NDVI, precipitation levels, land cover class of the landscape, crop yield, and an index indicating ENSO phase (i.e. El Nino, La Nina, or Neutral). They then calculated the Spearman's rank correlation between spatially and temporally coincident locations. 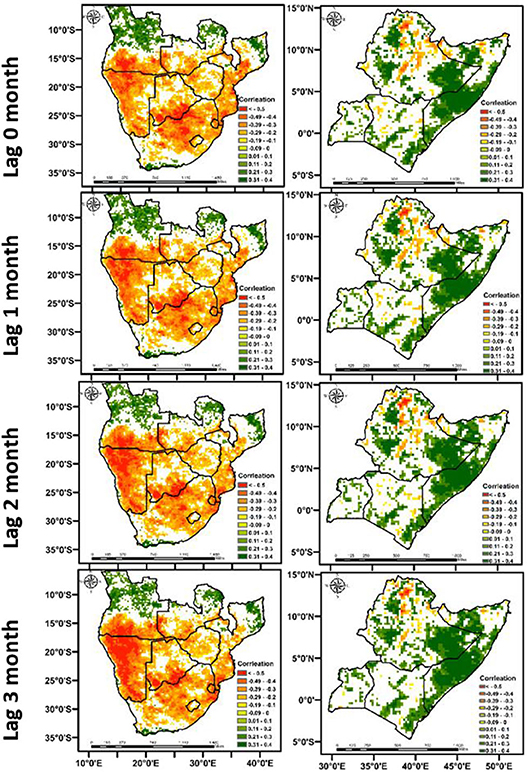 Correlation between ENSO and standardized NDVI anomalies over Southern Africa and Eastern Africa for the period of 2010–2019. The white areas are the pixels for which the correlation is not significant at the 90% level.

Their results showed that vegetation conditions are strongly associated with ENSO and these vegetation conditions have a dipole pattern that is reverse between El Nino and La Nina. Further, a lagged correlation analysis showed that soil moisture and ENSO phase are able to predict vegetation conditions with 1-3 months of lead time. As they point out in their paper, it is important to remember that ENSO impact on crop yield varies with geographic location, crop types, and ENSO phase. Additionally, ENSO impacts are not perfectly “reversed” as ENSO moves from El Nino to La Nina. For instance, maize yield increases in Southern Africa in La Nina are much smaller than the associated decreases in maize yield in El Nino years. 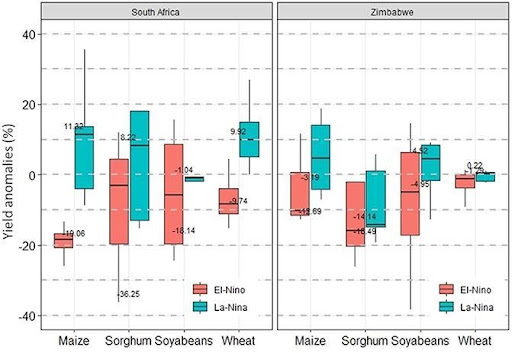