The High Plains Aquifer in the Central United States is one such zone. The aquifer provides water for 6 million hectares of cropland, accounting for ~30% of the US’ groundwater irrigation. It is a major pillar of the region’s $7.5 billion agricultural income. Aquifer depletion could result in the loss of about a quarter of currently irrigated land over the next 80 years, leading to significant repercussions on agricultural productivity and income in the central United States.

This first LEMA focused on a 256 km2 zone in northwest Kansas that is dependent on groundwater. Operating on a 5 year cycle, the LEMA planned to reduce groundwater pumping by 20%. Over the 5 year period (2013-2017), farmers exceeded this target, reducing pumping by 31% when factoring in seasonal weather. This water savings came about from only a modest 2-5% reduction in irrigated area and various management improvements, including increased water use efficiency and switching to crops with lower irrigation demands like sorghum. The chart below shows how the planted area of various crops changed in the 5 years before the LEMA went into effect vs its creation. 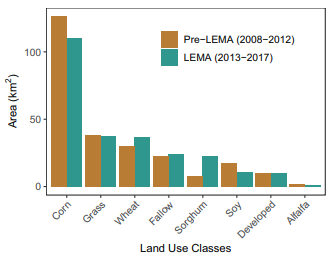 Figure 1. Dominant land cover in the Sheridan-6 Local Enhanced Management Area (LEMA). Mean area for the eight predominant land cover classes based on NASS Cropland Data Layers (USDA-NASS, 2017) for the 5 years prior to the LEMA (2008–2012) and the initial 5-year LEMA period (2013–2017).

A key factor to consider when investigating groundwater irrigation is the amount of irrigated water that is not used by crops and returns to the aquifer (i.e. irrigation return flow). As would be expected, since the amount of water pumped in a LEMA program is less than what is used in a business as usual situation, the irrigation return flow would actually shrink in the former as less water is used initially. This is referred to as the Paradox of Irrigation Efficiency. Using a variety of remotely sensed and in-situ crop, weather, and soil data, the co-authors modeled how the irrigation return flow varied between a BAU and the LEMA scenario. They found that the LEMA program resulted in 8.6 million m3 of groundwater preserved through a combination of reduced pumping and irrigation return flow. This is equivalent to 34 mm of aquifer recharge over the modeled time period in the LEMA scenario vs BAU.

While supporting the LEMA program’s effectiveness, the co-authors note that this average aquifer recharge is still lower than the amount of water extracted from the aquifer. Water sustainability is reliant on the amount of aquifer recharge (combination of irrigation return flow and precipitation) being equal to or greater than the amount of water extracted. As water extraction was still higher than recharge, even in the LEMA scenario, the aquifer is still at threat of depletion. To prevent this, stricter pumping reductions would need to be enacted in years with less precipitation, additional water use efficiency, less irrigated areas, and less water-hungry crops will need to be utilized. 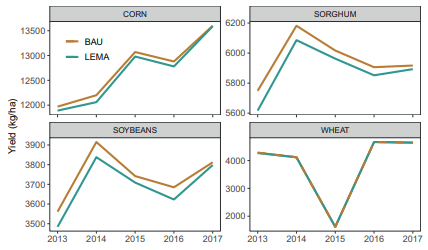 Figure 2. Yield penalty due to reduced irrigation water use, 2013–2017. Annual median yield by crop estimated from the SALUS crop model for the Sheridan-6 Local Enhanced Management Area (LEMA). The LEMA scenario (teal) slightly underperformed the business-as-usual (BAU) scenario (brown) for all crops except wheat, which were highly similar between the two model scenarios (here, the two lines are nearly identical). SALUS, System Approach to Land Use Sustainability.

Also of interest are the economic implications of reduced pumping on crop yields and the associated farmer incomes. The co-authors found that pumping reductions did result in slight yield losses within the LEMA program area. Corn yields, for instance, were reduced by ~1.2%. These yield losses, however, were more than offset by the savings in energy costs gained from pumping less water, which were found to be ~25% lower than in the BAU scenario. In fact the savings from reducing groundwater pumping were found to be ~4.5x greater than the minor yield losses, meaning that not only was the LEMA program successful in reducing the rate of groundwater depletion, but it also increased net profits.

The full study can be found here.